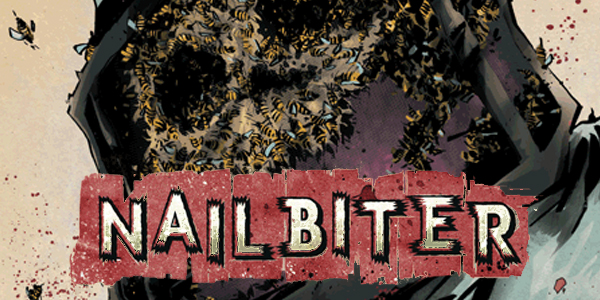 Nailbiter #8 might bee the creepiest offering from this series yet, as Finch learns about buzz and Crane wishes the Nailbiter never was.

Recently, Image Comics released Nailbiter #8, the next chapter in the tale about an off-beat town home to a number of the world’s craziest serial killers. The team pulling this series together includes writer Joshua Williamson, artist Mike Henderson, and colorist Adam Guzowski. After last issue’s Powers #7 tribute, it’s time to get back to the crazies, meet some townsfolk we haven’t yet, and get a whole new case of the heeby jeebies thanks for some odd singing and some buzzing bees.

Nailbiter #8 starts off with a close look at a guy dissecting a honey bee, while singing the bumble bee song we know from our youth. However, this rendition just seems creepier, especially when sung over a scalpel cutting off the wing. The man behind the knife is certain the bees hold the true knowledge of how to save the town, and apparently chopping them up one by one is the best way he knows how to unlock it. Unbeknownst to him, Finch has stumbled upon the cabin where the beekeeper lives, following notes left by his injured partner Agent Carroll. The man that answers the door is younger, and wields a shotgun. However, Finch seems determined to get to the bottom of this, and won’t let some idiot with a shotgun stand in his way.

Leaving Finch for a bit, we find our way to Sheriff Crane, who is blowing off some steam down at the gun range when the passive aggressive Agent Barker arrives. The two women exchange words, and it becomes clear quickly that Barker’s eyes are on Nailbiter Warren, who just so happens to be Crane’s ex-boyfriend. Following an accusation that the two might be in cahoots, Crane reminds Barker that she has been under a constant state of surveillance by the media, so if she was really working with Warren, it’d be common news quickly. What we ultimately get from this scene is how bad ass Crane is, and how she will stand up to anyone, regardless of what weight their title carries. I also loved the tough girl shot of her firing directly at the viewer while delivering her final shut up retort to Barker.

Over at Casa de Nailbiter, a swarm of news reporters have congregated at the front door, all eager to break the story that Warren is back up to his old tricks. It’s a quick visit, but we get to see Warren hand pick a reporter to come in for the scoop, but the man doesn’t last very long before he goes running and screaming from the property. Which is just as well to Warren, who really wants to get back to his finger paint masterpiece of Crane, which he may be drawing in blood. From here, we meet Reverend Fairgold, the father of Hank, the boy that was crucified back in issue 3. The good Reverend is preaching to a small crowd when he’s interrupted by Alice and Crane. The two go back and forth, but ultimately the Reverend is calling for an end to the town secrets. He also reminds the town that Crane and Warren were romantically linked, which seems to continue to turn the town against the badge, and call into question all of Crane’s trust.

Back at the beehouse, Finch is trying to get answers out of the crazy flannel clad idiot that pulled a shotgun on him. The two are now sitting in his kitchen, but the man assures Finch that he’s never met Carroll. Being an Army Interrogator in a past life, it doesn’t take long for Finch to catch the guy in a lie, which heightens the stress of the situation. Compound this with weird noises coming from the basement, and we got ourselves a stand off. In a very suspenseful moment, the two men appear poised with guns drawn, but as you could of guessed, it’s Finch who gets the upper hand, and eventually incapacitates the guy. This allows Finch to further investigate the basement. Once down there, we’re met with the same creepy singing from the intro, but this time we get to meet the man behind the voice. The old man with the bulging eye is the grandfather of the man upstairs that Finch shot, and is deep in his study of bees. Finch tries to get answers about Carroll, but no good. The mere mention of Carroll’s name send the old crazy guy into a rampage, and he summons a swarm of bees to attack Finch as the issue comes to a close.

Nailbiter #8 continues to be one of the most suspenseful and strange stories I’ve ever read. Williamson does an excellent job at turning each spread into a mini cliffhanger, causing the viewer to anxiously await each page turn in hopes of finding resolution. This has been constant throughout a majority of the series. I also really like the artistic style of this book. It’s a darker subject matter, so Henderson and Guzowski do a fantastic job of painting scenes that are equally eerie and that are visually interesting. Guzowski even got to expand beyond colors, creating a great pinup of one scary ass skull bee in the back of the book. When I talked to Williamson at NYCC, he said that Nailbiter #9 was one of the scariest things he’s written. We’ll finally get to see how good it is when Nailbiter #9 is released next year on January 7, 2015.