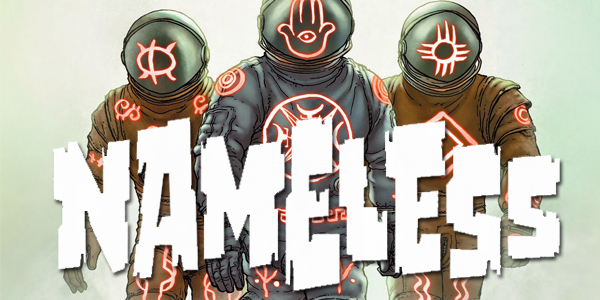 Image Comics released the newest series from well respected writer Grant Morrison entitled Nameless. Together with artist Chris Burnham and colorist Nathan Fairbairn they paint a dream world filled with oddities and tension as the Earth is on the brink of utter destruction at the hands of an asteroid. Why didn’t they just call Bruce Willis?

The Skinny
Well, the promo posters weren’t lying. It really seems like nothing is real, and Earth is in some deep doo doo. There appears to be either an infestation of lizard people or angler fish people, both of which look down right frightening. Forget them though, because the real threat is a massive asteroid named Xibalba which has a strange figure eight symbol carved into it, oh and it happens to be hurtling towards Earth. The lead character Nameless (which in itself is a name…) is left to figure out what the hell it all means and whether or not he’s actually awake.

The Good
Nameless seems like a solid point of view character to hang with as Morrison’s head scratcher unfurls. At times he’s like a foul-mouthed Indiana Jones, especially during the part with the key. The art is a big selling point of this book, and may be what keeps me tied to the series as it progresses. Between the nontraditional panel layouts and progressions to the very emotionally driven expressions, the creative team have developed a very strong footing for the story to get weird. It’s clear they’re doing what they can to corral the readers down a very winding path.

The Not-So Good
It’s a Grant Morrison mind-melt. The story moves so fast from one part to the next that you can’t get a sure footing on anything. What I’m sure will no doubt be a great story when it’s finished appears to as a very confusing first issue. So many things included to weird out the viewer, like him pulling a quarter out of his own ear, then the weird shot of the wiener snake thing. Follow this up by his attackers getting on the bus, but he doesn’t seem to care? Oh then of course it’s speed boat time. Short story is, it’s just plain strange.

The Decision
If you like Grant Morrison, deep comics about the human condition, and really weird art involving drowning, drones, and dreams then this book is a must buy. I think what most people will end up doing is waiting for the first arc to finish, then grabbing the trade. Not me. The cover art sold me, and although I feel lost at times, I am still curious enough to pick up the next issue. I mean, c’mon, they’re heading to the dark side of the moon, things are about to get full on whacky. Nameless #2 is due out March 4th.