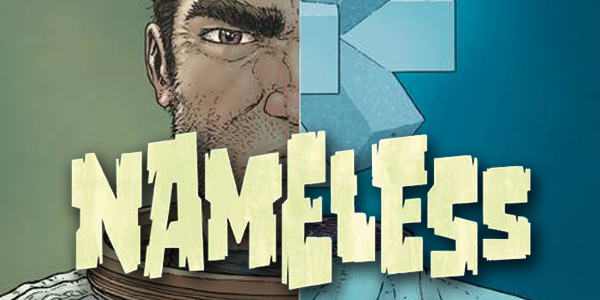 A giant asteroid is hurtling towards Earth…time to break out the fingerpaints?

Nameless #2 is written by Grant Morrison, drawn by Chris Burnham and colored Nathan Fairbairn. The series is released by Image Comics and continues to confuse as much as it delights as we watch a team of people head into space in hopes of redirecting the impending asteroid and saving the planet.

The Skinny
The team makes it to the base, where we get to see what the latest in 1980’s Russian tech looks like as the team scope out their new lunar base. However it’s not long before something goes wrong and we end up with the first murder on the moon. It’s cool though because first thing’s first, there’s a giant asteroid barreling towards Earth. You know what that means, time to break out the fingerpaints.

The Good
It’s intriguing to see the story changing by the second issue. What looked to be a story that Aerosmith would write a song for looks like it might really be a story about a case of the sniffles that makes you hunger for blood. The art looks good, balancing good facial details and backgrounds that don’t skimp on the finer points. I also really liked the interesting panel inlays and the use of geometric shapes to add to the complexity of the story telling, as well as the overall plot.

The Not-So Good
I’m not sure why, but I’m having a very hard time connecting with any characters in this story. It could be that the main man is Nameless, but even that is a name in itself. Also, I’m curious to see how the symbols they painted on protect them from anything. That being said, the art and greater arching plot is enough to keep me invested until the next issue, but we’ll see how long that goes.

The Decision
Nameless #2 is a pretty cool book. The covers have been eye catching and I really liked seeing last issues cover art be featured within this issue, to give it context. Still not sure about the paint, but maybe we’ll see the symbols work when Nameless #3 comes out this month.