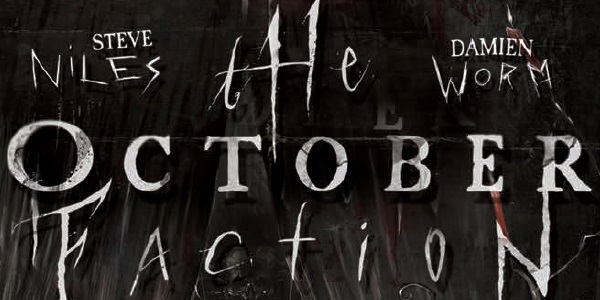 The October Faction #3 proves that the Allans could give the Addams a run for their money.

This month’s October Faction showcases the relationships between the individual members of the Allan family, 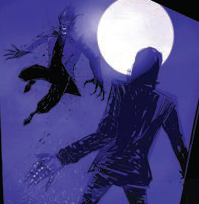 and sheds a little light on Deloris Allan, who has been totally silent in the few appearances that she has had in the last two volumes. This time we see her interact with her husband Fredrick, and it opens up a whole new aspect of his character, as we finally get to observe him having conversations with another person that he doesn’t…

A: Hold some sort of dominion over
or
B: Seem to be revered (or hated) by.

There’s a welcome moment in the hospital which also calls back to the very first scene of #1 where Geoff is confronted by his high school tormenter. This time, the two characters’ dynamics have matured, leading to a more intelligently constructed moment between them that doesn’t rely too heavily on post high school cliches.

The monsters this time around, remain that exact same no surprise garden variety lot, just like before. But quite unlike before, instead of working against a story that promotes accepting weirdness, it pushes the horrorshow to the background and focuses on the theme of family by presenting surprisingly healthy and positive connections between the characters. Deloris’ and Fred’s back and forth bantering honestly evokes a sense of genuine partnership based on mutural attraction. Geoff and Vivian give the impression that they are each other’s best friends due to the lack of companionship of an outside party with the same insight. As such, they act more like friends instead of brother and sister, and it creates a vested interest in their continued friendship which is a surprisingly fresh dynamic, considering that usually brothers and sisters are presented as more rivals that cooperative units. There’s a small focus on the mythos of the Allan family relating to the “renegade” that was let loose in the second volume that is picked up and makes for yet another third party interest in the plot, building the number of outside perspectives to three and setting up yet another avenue for intrigue in the future of the story.

All in all, Steven Niles’ and Damien Worm’s new October Faction rocks! It’s not because of any of the reasons that you would think it would, just by looking at the art and the overall tone. It is creepy and the atmosphere is built effectively by Worm’s distinctive artwork to be sure, (plus the fidelity in the fight scenes, as well as a surprisingly grounded set of physics, make the monster bouts way more natural seeming) but this is the first volume to really feel cooperative in it’s nature. The Allan family really comes together as individuals, but more importantly as a unit. All this is served by an ending that returns the story to it’s horror-core by using a cliché, but one that’s serviced by the camraderie that’s been built in the rest of the volume. In my reviews of the previous October Factions I stated that the more interesting aspect of the story ended up being that of the family dynamic, and that the horror was best left as the setting and not the focus, and I’m happy to say that that’s the route that Steve Niles’ third volume goes in; and it proves to be surprisingly sweet. I find myself marveling at the fact that there are no characters in October Faction to project on to because that’s how close-knit the Allan family is being portrayed, which means the reader may not be able to put themselves in the story, but they still get some great seats to experience it from.