Comics Korner: On the Advent of Digital Comics 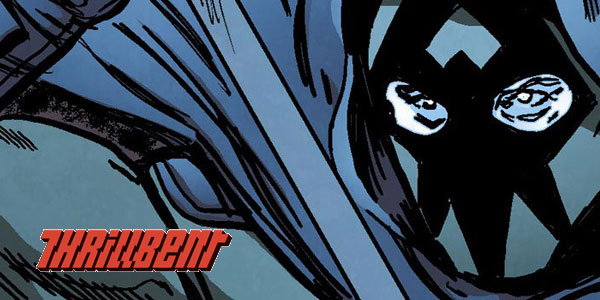 This week we’ll be looking at a couple of the best comics on the racks and online.  Veteran comic book writer Mark Waid just recently launched his new website that’s been a long time in the making, Thrillbent.com, which offers up innovative digital comics – for free – every week.  Keep reading for our initial impressions of Waid and company’s foray into the future of comics! 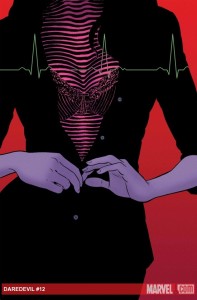 Now that the dust has mostly settled after the huge Omega Effect crossover event, Matt Murdock can enjoy some social time with the beautiful new Assistant D.A.  I would have been perfectly happy if this issue simply showed their date and nothing else, as Mark Waid’s scripting is always razor-sharp and entertaining, but I was overjoyed when it turned into a story of Matt and Foggy back in law school as Matt told it to his date.  It turns out that before Nelson & Murdock law firm was even a twinkle their eyes, they were working together to clear Foggy’s name after a plagiarism charge from a rotten professor.  Seeing Matt as a smug and over-confident younger man was a great way to make his character even more relatable and learning that he never would have made it through school if not for the financial assistance of Foggy added a whole new layer to their friendship.  The dialogue throughout the issue, especially during the mock courtroom scene, was natural, believable, and, most importantly, good fun.  The issue ended on a negative note and reminded us that, as much at Matt attempts to lead a normal life, he is still the most dangerous man on Earth and will be treated as such until he is rid of the Omega Drive.

Artist Paolo Rivera has been replaced, at least for now, by Chris Samnee.  Luckily Samnee’s art contains just as much charm and finesse as Rivera’s.  His lines are heavier but the faces he draws are totally expressive and they retain everything that Rivera brought to the series initially. 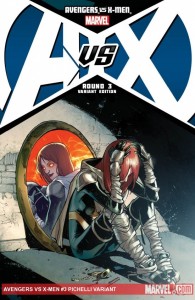 The biggest comic event of the summer continues this week with an issue that moves a little bit slower than the previous two but still manages to keep the story moving along nicely.  Now that Hope has escaped after already showing signs of succumbing to the Phoenix Force’s control, both teams must give chase.  Most of this issue was dedicated to the Avengers, specifically Captain America and Wolverine.  After the latter’s attempt to kill Hope last issue, Cap sees him as more of a hindrance than a help and conspires to drop him off of the ship into a frozen tundra.  Of course, Wolverine puts up a hell of a fight, which spans six awesome pages and perfectly captures the brutal fighting styles of both Wolverine and Cap.  What they both lack in finesse they make up for with sheer power and Romita, Jr. choreographs and draws the fight in a way that really lends weight to every punch and shield-smash to the face.  This fight was way more exciting than anything in last week’s issue of AvX: VS.

The AR features in this week’s issue of AvX actually bring something new to the table in the form of short talking head videos.  The first is from Ed Brubaker, who wrote the script for the issue.  He mentions that the fight between Wolverine and Captain America originally contained other more obscure characters who were removed for one reason or another before the final draft.  This is the kind of thing that the AR technology excels at; exclusive content straight from the artists and writers that can’t be viewed anywhere else, and that actually offer insight into the comics.  The other video is a tongue-in-cheek segment that involves a surgeon discussing what would actually happen to Wolverine if he fell from 10,000 feet and hit solid ground.  I took it as a clever nod to the absurdity of superhero comics and the characters’ lack of actual, lasting physical harm.

In an effort to keep this as concise as possible, I’ll start out by posting the explanation of the concept right from the website’s About page:

“THRILLBENT is a digital comics site created by acclaimed comics writer Mark Waid and television writer/producer extraordinaire John Rogers. It is an experiment in new-media publishing. Nothing about it is carved in stone; the site will change and evolve with the help of your feedback and constructive criticism. There will be glorious successes, there will be crashing failures, but most of all, there will be the courage to challenge 75 years’ worth of accepted “rules” about what comics are and aren’t.

This is NOT an attempt to “kill print.” Mark, John and their collaborators all love print comics. Mark alone writes what seems to be about one out of every three published these days. Print and digital can co-exist; we’re just trying to level the playing field between the two.”

Obviously, the intent of this endeavor is pure.  Mark Waid has been championing digital comics on his blog for awhile now, and has been seeking the opinions of his readers every step of the way.  He’s so incredibly prolific that going out of his way to embrace this strange new world of digital comics should be the last thing on his mind.  But he’s taken the initiative to try something new; instead of just creating comics for print and throwing them up on the web, he and his team have created a novel way to read them that takes full advantage of the neat features of tablets and mobile devices and that actually enhances the storytelling.

Visit the site and check out Luther, a self-contained story about a mentally handicapped kid in a post-apocalyptic zombie-infested wasteland.  You will immediately notice the new potential for the medium that this technology brings to the table.  New images can appear instantly inside a pre-existing panel, which will be great for scares in a horror comic.  Word balloons can appear in sequential order, avoiding any confusion as to who says what, and when.  The fact that it’s built right into the browser is also a great feature, as it can be viewed on literally any device with a screen and an Internet connection.

Is this the next evolutionary step for the comics medium?  After seeing what these creators have already done with the technology and knowing that it will only continue to improve with time, I really do think so.  Even Marvel has started to embrace it with their digital-only Infinite comics (the first of which was already released and was, not surprisingly, written by Waid).  Comics luminary Scott McCloud started making webcomics back in 1998 (you can still view them here), and this new method builds upon this concept and attempts to bring digital comics to the same level of legitimacy as print, but on their own terms.  I know that I’ll be watching it all unfold, and I think anyone who considers themselves a fan of comics would be wise to do the same.