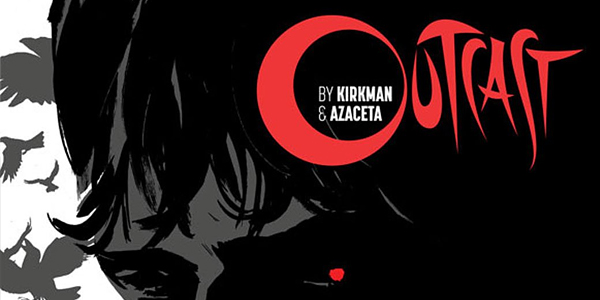 I took my lunch break to rush down to my local comic shop and scoop a copy of the new book by Robert Kirkman and Paul Azaceta called Outcast. Put out by Image Comics, Outcast #1: A Darkness Surrounds Him is a dark and suspenseful story about demonic possessions. Kirkman stands on the shoulders of William Peter Blatty, with some panels exploring a similar dynamic to The Exorcist. However, in true Kirkman fashion, unexpected things occur, blood is spilled, and evil stuff attacks.

For example, the second page in, Azaceta has you looking at a tormented child biting off his own tongue and wrecking his nice white socks. I really enjoyed how quickly the weirdness started. A couple panels later and we meet the well-connected Reverend, who is called away from his poker game to go deal with Joshua and his possession problem. Joshua’s mother tries to assist, and is thanked with a kiddie kick to the septum. It’s clear that the Reverend is going to need some help.

Interspersed with the possession of little Joshua, the reader also meets Kyle Barnes, a hermit of a man with a troubled past. He also has a very caring and persistent step-sister who happens to be married to a cop. After some amusing interaction between him and his sister– which really tells a lot about Kyle without saying much– Kyle reluctantly agrees to help the old Reverend out. This is where Azaceta really gets to explore some demented illustrations. There are a great few pages chock full of violence, twitchy little kids and holy water, but ultimately there’s nothing that seems to be working on poor little Joshy, until we learn why Kyle keeps being called the Outcast. I don’t want to wreck the surprise for interested readers, but I will say that I didn’t see it coming.

I can’t say enough good things about this story. There are pages with barely five words on them that tell you volumes about the relationship Kyle has with these demons. That’s the true strength of the medium. When wielded by a true artist like Paul Azaceta, the reader can understand the inner turmoil plaguing Kyle without him saying a single word. There are a few silhouetted panels, reminiscent of Frank Miller’s style, that beautifully break up the layout and offer a nice rest for the eyes.

In the letter on the back cover, Kirkman talks a bit about what to expect in the upcoming issues of Outcast. Unlike The Walking Dead, which he says could never happen, he feels exploring the world of demonic possessions is more realistic. I am curious how he’ll be able to write an epic like this and not explore the area of religion, though. In any event, consider me possessed by a captivating storyline. I can’t wait to get my hands on Outcast #2!