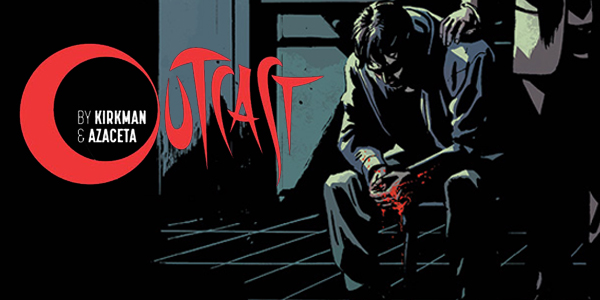 Everyone sees the blood on your hands, but will anyone see the demons in their eyes?

New today from Image Comics comes Outcast #2: From The Shadows It Watches. The story is written by Robert Kirkman with art by Paul Azaceta and coloring by Elizabeth Breitweiser. I don’t usually note the colorists, but I need to be upfront. The world that Azaceta and Breitweiser create is morbid and chilling due to the colors alone. A landscape of muted purples and greens leave the reader with an uneasy feeling of dread, and is the perfect setting for Kirkman’s drama about people being overtaken by malevolent spirits.

We pick up with the lead protagonist, Kyle Barnes. Kyle has lead a very troubled life, and has been plagued by aggressors and dark spirits for as long as he can remember. As the story opens, he’s facing one of his biggest fears of his life, his mother. His mother, Sarah, is confined to a hospital bed and appears to be in a vegetative state. Her eyes are lifeless and empty, but this doesn’t stop Kyle from pouring his heart out to her. See, in Outcast #1, we learn that Kyle is special. His blood has the ability to harm the demon spirits that have been possessing the loved ones around him, like his mother. Also, with this new understanding, comes the realization that his mother may not have had a choice when she was beating and tormenting him. Looking back on it now, he is pretty sure she was possessed, as well as when it happened to his ex-wife, and then when it happened with his daughter.

We leave Kyle in the hospital room with his mother and catch up with the other half of our ghost busting team, the Reverend. He is currently mid sermon and is offering his congregation some advice, when someone catches his eye. The man seems to distracts him, causing the Reverend to stammer over his words, but who’s to blame him. The man is older, slender, and pale-skinned with dark pockets around his eyes. The man just happens to stand up as the Reverend begins talking of the devil, possibly a thoughtful foreword from Kirkman? In any event, the man’s presence is off putting to the Reverend, and after the service, he decides to check in on Kyle to see how he is recuperating after their Exorcist style intervention from last issue.

Right before the Reverend knocks on Kyle’s door, we catch him doing a bit of spring cleaning. I really liked the small flashback scene, where the viewer can see little Kyle getting his tooth knocked out by his mother’s heel. A good reminder for those of us who forgot about Kyle’s upbringing. The Reverend and Kyle talk for a minute before the Reverend starts asking Kyle to tell him if he sees anything suspicious. We get a quick small panel look of the creepo from the church tipping his hat, alluding to the fact that this dude is probably not a good guy. Once their conversation is done, Kyle asks for a ride into town, to which the Reverend is eager to oblige.

In town, Kyle recognizes a familiar face. A guy name Donnie who Kyle knew from growing up. At the same time, we also see that the cops are watching, although Kyle pays no mind to it. He should though, because this isn’t just any cop. This happens to be Mark, the cop that is married to Kyle’s adopted sister, Megan. Also worth nothing that Officer Mark is not Kyle’s biggest fan. Donnie tries to quickly ease the tension between he and Kyle, saying he’s on a righteous path lead by the twelve step program. It’s clear Kyle isn’t buying it, nor that Kyle wants this guy around. Donnie is determined to go see Megan to apologize for his past, which Kyle contests. Donnie tries to plead with Kyle, but no luck. Out of nowhere comes a big left first from Kyle that smashes into Donnie’s cheek bone. The two proceed to scrap, but it’s not long before Officer Mark comes running up to stop it. He begins reprimanding Kyle, but all Kyle has to say is “This is Donnie”. Before you know it, Officer Mark starts laying into this guy. He beats the bejeezus out of Donnie, and promises that if he ever shows his face around town again, it’ll be the last time he’s ever seen.

After Donnie runs away, Mark offers to buy Kyle a beer. As the reader, I couldn’t help but hope that for an instant, you think they finally are ready to bury the hatchet. It’s not long until the beer with Officer Mark turns into judgement from officer Mark. We learn that Kyle used to protect Megan from Donnie by becoming Donnie’s punching bag. Kyle moved to foster care after stuff with his mother went south, and it’s because of Megan that he was adopted out of it. From here Mark reminds us about the skeletons in Kyle’s closet. Mark doesn’t know about the possessions, or about what Kyle can do. So all he sees is a sick and twisted wreck of a man who his wife takes pity on. Mark blames Kyle for Kyle beating up his wife and daughter, but how can Kyle explain what really happened. He just hangs his head and excuses himself from the bar.

The book closes with a visit from Mr. Creepy to Kyle’s mom. He stares into those lifeless eyes and tells Sarah how sad it is to see her like this. She had so much fire, so much life. The worst part is, her son will never know how hard she fought against Mr. Creepy. Creepy says Sarah would have given her life for Kyle, and in a way, she did. The book ends with a single tear rolling from her sterile stare.

Outcast #2: From the Shadows it Watches is a fantastic second offering from Kirkman’s team. Although the second issue lacks some of the gratuitous gore and bizarre movements that the first issue had, it better familiarizes the reader to the players, building our empathy for them. We start developing feelings for Azaceta’s illustration of Kyle, and wish for a moment a friendly face would understand his plight. As Kirkman has displayed during his time with The Walking Dead, it’s usually the characters that you feel the most for that will face the toughest perils, or even death. I can’t wait to see what happens next. If you are a horror fan, or even just dig the macabre, you really shouldn’t miss an issue of this suspenseful series.