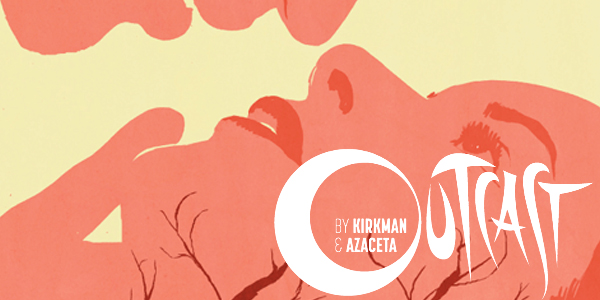 We all have thoughts we know we shouldn’t be thinking…but what if you want to think them?

Image Comics released the next issue in the Exorcist inspired series Outcast #3. Written by the Duke of Dark himself, Robert Kirkman, eerily illustrated by Paul Azaceta with the creepy coloring of Elizabeth Breitweiser, Outcast #3: I Remember When She Loved Me is a haunting continuation to this story of demonic possession and scriptured skirmishes.

The story opens with a torrid love triangle of strangers. A guy by the name of Luke apprehensively leaves his girl Theresa tending to some guy named Blake. It becomes clear, rather quickly, that Theresa and Blake have a history, and may be guilty of having an affair behind Luke’s back. The pair’s passionate kiss swiftly takes a turn for the worse when Blake takes a chomp from Theresa’s tongue then spits it back at her. It would be a safe assumption that Blake isn’t feeling like himself when we see the sinister smile that Azaceta paints on the faces of the possessed. By the time Luke gets back, Theresa is a lifeless corpse, the apartment is spattered in blood, and Blake seems to be taunting Luke from a shadowy corner with his hands and feet covered in presumably Theresa’s blood.

With a page turn, we find ourselves back in the presence of the Reverend, hard at work around the poker table. I really enjoy the way Kirkman is writing the Reverend to be a hardened realist who tells his friends they shouldn’t be worried about God watching all their intimate affairs because he’s busy watching the wars and other really important stuff going on. He continues to talk about how it feels like God is on the losing side of a war, due to the growing level of wickedness that can be seen. He credits his alcohol level for his outburst, and excuses himself from the game for a bit. After this, we meet back up with the main protagonist of the story, Kyle Barnes, who is seen cleaning up some stuff by his front door. Kyle is surprised by an invitation from his elderly neighbor to join him for lunch, to which Kyle shockingly accepts.

The story jumps back to the Reverend as he manages to find the way to his chair after a long night/morning of playing cards. Not soon after he gets comfortable, he’s interrupted by a knock at the door from his assistant, and older woman that was seen in the first issue. Turns out all that card playing has purpose, because from only one night of “work”, the Reverend is able to cover the balance of the roof fund as well as the cost of the fall picnic. I really like the dynamic that is building between the two characters of Kyle and the Reverend. It feels like they are on a see-saw of morality, where Kyle is on a slow rise to recovery while the Reverend fights his demons with drink and gambling. From here, we join Kyle and his neighbor around the lunch table, and we get to learn a little more about Kyle’s ex-wife Allison, but not much. It’s clear Kyle is remorseful about how their relationship degraded, and is very unsure if it’s worth picking back up. The story jumps back to the Reverend who can be seen leaving a heartfelt message for someone named Matthew, who happens to be the Reverend’s son. Despite promising Matthew that he wouldn’t call anymore, it seems like recent events have shaken the Reverend, making him questions some decisions he’s made in life.

From here, we get to a little PSA that Kirkman adds for color. We see a little girl named Holly standing by the trunk of her mom’s car as her mother is loading up the groceries. However, like a typical child, something catches Holly’s attention and she starts moving towards the street. We see a panel showing a driver texting (seriously though don’t text and drive, idiot), followed by a close up of Holly taking a step off the curb with the car approaching. Thankfully a man swoops in and saves Holly just in the nick of time. Who might you ask? That creepy ass dude from the last issue. Maybe he’s a good guy?

The issue finishes with Kyle experiencing a flashback of sorts. He’s remembering the night he and Allison conceived their child, and how much joy there was bringing new light to the world. But as he makes it to his front door, he remembers how dark and gloomy his life has become. As the issue ends, we see Kyle awakened by a knock at his door. He grumbles while walking, expecting to find his nosey yet helpful adopted sister Meghan. Instead, he finds a shaken Detective Luke Masters, the Luke from the beginning of the story, who is desperate for Kyle’s help.

Outcast #3: I Remember When She Loved Me is definitely the slowest issue from this series so far. Kirkman takes some time to really identify these characters, letting the readers into their history a bit, building a better understanding. Aside from the tongue ripper at the beginning, this issue felt disappointingly devoid of demons. That being said, I can appreciate the need for a strong character building issue, as long as they follow it up with an action-packed #4. Azaceta and Breitweiser are jiving terrifically. Azaceta’s dark brushed panels act as a perfect canvas for Breitweiser to paint in gloomy colors to help capture this tome’s tone. Despite my small concerns with the story, Outcast #3 is still a solid offering from this title, and still has me hooked for issue #4 due out September 24th.