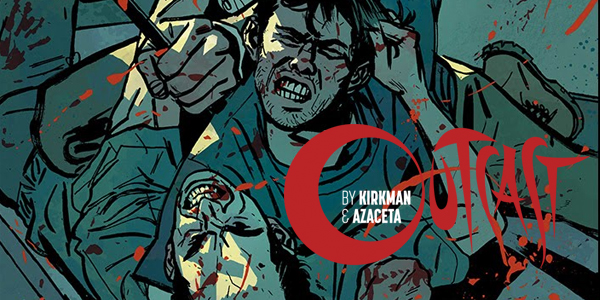 A couple of weeks back, Image Comics and Skybound Entertainment released Outcast #5: A Wrath Unseen. The story is written by Robert Kirkman, illustrated by Paul Azaceta, colored by Elizabeth Breitweiser and follows an unlikely duo of paranormal extractors. When we last left Kyle and the Reverend, they were hanging out with their new friend Luke as they meet Blake, the possessed man that murdered Luke’s wife in cold blood. Although the blood wasn’t cold at first, which Blake describes at the beginning of the issue.

It doesn’t take long for Blake to say something to set Luke off. By the second page, Blake is taking a huge right fist to the center of his face, and spends the rest of the interview looking deranged while bleeding from the nose. Azaceta draws some really haunting panels in the first part of the issue, using the dimly lit interrogation room to show lightly lit faces full of shadowy intrigue. Luke gets dismissed from the room quickly, and the boys try talking to Blake on their own, which proves to be even less fruitful. Blake seems hesitant to talk to the boys, and suggests that Kyle is familiar to him. Before anything too crazy goes down, the Reverend excuses he and Kyle to talk strategy in the hallway.

Once out of the crazy man’s earshot, the Reverend tells Kyle that he thinks the guys isn’t possessed, just nuts. Luke hears them, and pleads for them to stay, which the Reverend disagrees to. However it’s Kyle that leads the charge, and decides to go back in, and this time, no monkeying around. Kyle walks straight in, past the heckling and the yammering spilling out of Blake’s lips, and places his palm on Blake’s forehead. Blake screams in pain as Kyle seems slightly surprised at the reaction. After this, Blake’s tone changes. We get a wide, short panel showing Blake’s creepy stare as he asks, “Are you Outcast?”. This freaks the Reverend a bit, but Kyle’s determined to expunge the demon. He tags out, letting the Reverend take point, and the Reverend cracks open his tool chest. Ok it’s more of a tool briefcase, but anyway. He pulls out two weapons of choice, the bible and a bottle chock full of holy water. Blake squeals with excitement, because he loves to be read to.

The Reverend commences his ritual, spilling the sacred water over Blake’s face while shouting holy rantings. Blake feels no effect and takes pleasure in the refreshing water being sprayed on his face. So they decide to bring out the big guns. Kyle comes up from behind Blake and pins his head down while the Reverend presses his crucifix as hard as he can into Blake’s face. During this altercation, Blake is screaming for the guards, and struggling against Kyle and the Reverend. He even manages to get the drop on Kyle and smash his nose in with the back of his head. The blood starts to pour from Kyle’s nose while Blake faints, and finally Kyle reaches some clarity. He’s finally figuring out that their victims are reacting to his touch. Or maybe it’s his blood?

Kyle takes a big smear of his bloody nose and wipes it on Blake’s face. He wakes up and starts struggling, but this time Kyle covers his mouth the keep him quiet. Then, surprisingly, in runs Luke, yelling at them to stop before they kill him. The boys swear it’s working, and the panel showing the creepy brushed vapor rising from Blake’s mouth would suggest they were right, however ultimately Luke ends the exorcism. They’re forced to leave Blake looking battered on the interrogation table, asking for more. Before they can give it to him, the officer who let them in throws open the door and kicks them all out. Apparently bloodying up a criminal is a bad thing, who knew?

Feeling dejected and frustrated at their failure, Kyle and the Reverend are quick to leave the West Virginia prison. All Luke wants to know is what the hell happened, which pushes the Reverend’s buttons a bit, causing him to lash out at Luke. The man of god drops an f-bomb then leaves without saying anymore. Luke appears stunned. We move ahead to Kyle’s house, where the Reverend is seen dropping him off. The two talk plans for tomorrow, and decide that going to see cranky ol’ Mildred would be a good idea. While they’re talking, it looks like they’re being spied on by a red eyed crow, which is only made worse by the last panel. As the Reverend alludes to the fact that he and Kyle don’t necessarily know what they’re doing, he suggests that they could be experiencing a threat greater than anything they could have imagined. Right under these words we can see Sidney, the suspicious old guy who probably murdered Kyle’s neighbor, peering out from behind a tree. What an eerie way to end.

Outcast #5 is another great offering from the creative team of Kirkman, Azaceta and Breitweiser. The art for this series has been exceptional, following the suspense of the story with heavily inked panels that feel stressful to look at. Kirkman shows his great understanding for pacing, allowing an action that would take place in a split second in the real world to develop across a series of panels, allowing the viewer to watch every emotional moment. There’s some mystery here still, keeping me tied to the story. Just how strong is Kyle’s super blood? What is it about his blood that makes him so powerful against spirits? Is this all a Sixth Sense type twist and Kyle is an Outcast ghost sent to protect the humans from the spiritual realm? We’ll just have to wait and see where Kirkman is heading when Outcast #6: Receive Your Mark is out on December 17th.