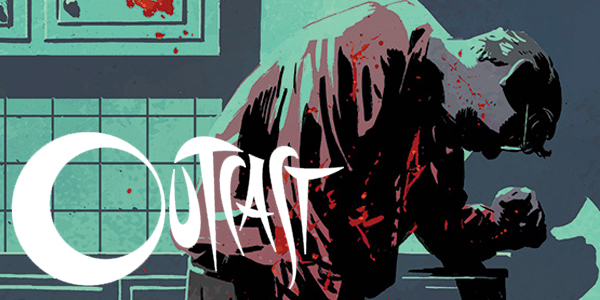 Have you ever danced with the devil in the pale moonlight in your kitchen?

Released by Image Comics and Skybound Entertainment back on Christmas Eve, Outcast #6 continues the gory story of demonic possessions and the toll it takes both on the body, and on the mind. The story is written by Robert Kirkman, illustrated by Paul Azaceta, and colored by Elizabeth Breitweiser. We pick back up with Kyle and the Reverend after they get back from the prison, as they’re discussing what’s next.

The Skinny
Another slow burner from the Outcast creative team. This issue features some insight into Sidney, the creepy guy that may or may not have murdered Kyle’s neighbor. The Reverend doesn’t trust him, and later in the issue, we learn why he was right not to. Before that, the pair visit with Mildred, the old woman from issue 4, to spend some quality time with a nice old lady. Events there inspire Kyle to go home and begin to face the demons of his past. It’s the end of the first arc, and the creative team leaves just enough there to keep me coming back.

The Good
The art continues to be what keeps me so glued to this series. Azaceta and Breitweiser are clicking on another level, with each panel offering just enough detail to keep the overall theme cryptic and feeling cold. The panel where Sidney makes his real introduction is set so dark that what remains of the image is amplified by contrast. It ends up being this super creepy portrait of a deranged man. Kyle’s charachter development has been enjoyable to follow. He has made substantial improvements since we met him at the beginning of the story, and it’s been inspiring to watch the new challenges he sets for himself. It would appear Kyle will be tested in the upcoming issues, as the trials set before him continue to grow in proportion. The story is slowly building towards a great altercation, quite literally between good and evil, and could see Kyle versus Sidney for the fate of the world.

The Not-So Good
I’m filing this observation in the not-so section because there really isn’t much else in this book to be picky about, but why doesn’t Mildred taunt like the others who have been possessed? Is she too weak in her old age, or is her demon simply more lethargic? The other thing that jumped out to me as a point of contention is something I see in a lot of comics. Particularly with Mildred’s dress, everything surrounding it so so beautifully detailed that the purple field pattern sticks out with its lack of definition. The results make for a strange blob of pattern in the middle of the panel, and becomes distracting. Breitweiser is able to make wonderful tonal ranges in all the other panels. A subtle darker purple to show some fold lines of the dress could have solved the issue simply.

The Decision
Outcast #6 is another strong offering from this creative team. The overall plot doesn’t get too progressed in this issue, but what we learn about the players is paramount. By the end of the issue, it would seem our heroes have both reached a new level, having faced some of their biggest fears, head on. The question becomes, despite getting too close to the truth, will the two men have the courage to continue seeking answers? There’s a bit of a break before the start of the next story arc, but I will absolutely be grabbing Outcast #7 when it starts back up in March.