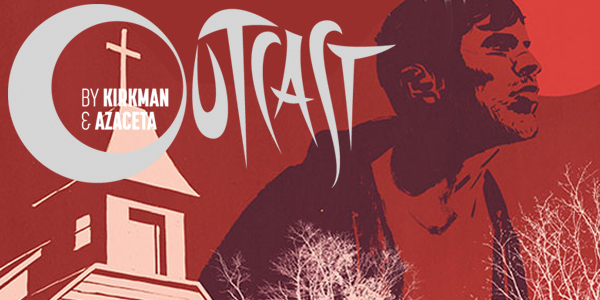 Kyle Barnes has ghostbusting in his blood, but will it be enough to face what’s building in the background?

Last week saw the latest issue of Image Comics and Skybound Entertainment’s creepy series about paranormal possessions, better known as Outcast. The story is written by Robert Kirkman, illustrated by Paul Azaceta, and colored by Elizabeth Breitweiser. Issue 7 is the start of a new arc to this story, and continues to follow Kyle Barnes’ quest to find out what he’s capable of. However, due to the events in the last book, the Reverend is more intent on checking in on past exorcism candidates to see if he even really helped at all.

The Skinny
The Reverend is shaken by his encounter with Sidney, but he is not beaten. He is instead armed with a better understanding of what he’s dealing with and a renewed determination to end it. Kyle’s “sister” Megan makes a trip to the city to have coffee with Kyle’s ex-wife Allison, who we learn still thinks of Kyle despite her fear of him. While she’s in the city, Megan also makes a point to meet up with another old friend, but that conversation doesn’t stay so civil. Kyle too goes to check up on a past acquaintance, and spends some time with Joshua, the boy from Outcast #1, before meeting back up with the Reverend to discuss what’s next.

The Good
I’m still in love with the visual pairing of Azaceta and Breitweiser’s abilities. The color tones throughout the entire series have provided a great setting for Azaceta’s ink heavy objects to feel alive. This, mixed with the combination of panel layout and angles makes the whole issue read feel effortless. The story is still interesting to me, despite my waning in the past couple issues. Seeing Megan deal with her trouble head on was excellent, and I even enjoyed how she interacts with Allison in a very matter of fact way. She has been a quieter character in the previous issues, so I’m interested in getting to learn more about her. Lastly, I’ve really liked watching Kyle’s character progression. The once shut-in, recluse is seen comfortably communicating with an assortment of people, and seems to have a new found confidence in himself. Maybe someday he’ll actually have enough resolve to say something the next time he calls Allison?

The Not-So Good
I find Sidney to be very curious. We see him early on in the issue, having trouble walking up to Kyle’s front door, as if Kyle’s ability is so strong that the devil himself couldn’t come close. However, fast forward a few pages, and Sidney seems unaffected when passing over the keys to Norville’s car. Is there something new going on in Kyle’s house that could cause such an effect? I seem to remember a past issue of Sidney ringing Kyle’s door without having trouble. Maybe the event is unrelated, but I can’t help but feel a little sympathy for an old man hacking up blood, even if he’s the devil incarnate.

The Decision
Outcast #7 is like the rest of the series in that it continues to delight and entertain while making the hairs on my arms feel funny from time to time. Kirkman has developed these characters more than some we’ve found in previous works, and has given deep thought as to how they will progress or regress. Kyle and the Reverend are off to check in on some past patients, to see if there was anything the Reverend might have overlooked. We’ll see what they turn up when Outcast #8 is released on April 29.