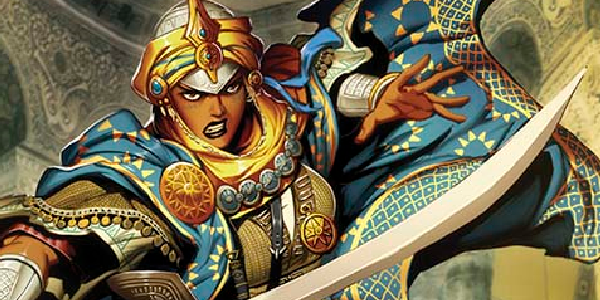 If you play any sort of tabletop RPG, with a vaguely Tolkeinish sort of atmosphere, you are fully aware of what you are getting in to when you pick up Pathfinder: City of Secrets.

The books are based off of the popular (or as popular as you can get when you’re a tabletop role-playing game, without inciting the wrath of various religious groups) tabletop RPG created in 2009 as a supplement to the widely recognized Dungeons and Dragons 3.5 edition under the OGL (Open Game License). When D&D creators, Wizards of the Coast, started trying to find easy ways to introduce new generations to their popular role-playing game, the people at Paizo decided to expand even more on their established system to create a new role-playing universe that they called Pathfinder. And so, there you have it. It’s D&D to the layman, and to the veteran it’s so much more. So who has two thumbs, and also happens to be a veteran role-playing aficionado?

Yes I too am a member of the pen and paper club. I’ve spent many a weekend delving in the deepest of dungeons, fighting the smelliest of trolls, and disarming the deadliest of traps. So if anyone can see the appeal of City of Secrets, it’s going to be me. But it’s not made just for me.

Pathfinder: City of Secrets #5 picks up right where #4 left off, as Kyra brings her party down in to the catacombs an 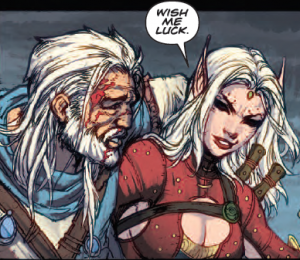 d comes face to face with two demons wielding great and evil power. #5 puts aside the political intrigue and espionage for a good old fashioned throw-down. It’s a familiar kind of story using characters that have already been established. It has value to a person who plays the system for the use of various situations, environments, and monsters, and could provide useful insight in to a how to play the game but it also works a standalone story. Every character is going to be familiar to you, even if you don’t read the series. Everyone from the hard drinking dwarf Harsk, the swing first ask questions later fighter Val, the conflicted cleric Kyra, to the thief with a dark past and a heart of gold Merisiel. But there is a reason that these archetypes are so present in popular fiction, they’re elemental. Everyone plays their part from both a story and action perspective.

“Everyone plays their part” is the key component of City of Secrets, and #5 is no exception. It’s a fight. Plain a simple. Luckily it’s a very good one. Our heroes prove to be capable, yet far from immortal, creating a surprisingly grounded battle between characters with titanic power. The action unfolds spectacularly thanks to

Leandro Oliveira’s choreography and continuity. The inks also capture the personality of Jim Zub’s complicated (in both personality and design) characters at every turn, creating that many more perspectives for readers to view the story from.  Every single character has a particular look and aesthetic, with insane amounts of detail(you’re never going to wonder who is who).  Ross Campbell displays a real grasp of his use of color, even though he doesn’t do a lot to differentiate from scene to scene as the tone remains consistent, an edge is still created by using gritty dark colors when appropriate, and explosive, effects for spells and lighting to create a contrast between the dirt and grime of the physical altercation, and the vibrancy and electricity that the use of magic creates.  His part in adding depth to the complex character designs, that take influences from typical armored fantasy, Arabian Nights, and even Japanese warriors, really sets off the contrasts of the characters’ respective histories by using a multitude of different colors and shades to separate the characters on virtually every visual level; thus creating a real menagerie of influences and backgrounds to choose from.  Luckily, Jim Zub’s script contains just the right amount of camaraderie and friendship to make these characters separate on a purely aesthetic level, without affecting their chemistry.

Pathfinder City of Secrets #5 is very much what you would expect from the fantasy adventure genre. It’s a big old fight in a big old dungeon with big old characters wielding big old weapons and spells. There’s an interesting sidebar where we see how deep Merisiel’s past has influenced who she is in the present day, but besides that, the highlight is the big fight in the catacombs. And it’s awesome. The colors create a real mood, the effects of spells and blood and action are spot on, and the character”s personalities and choices play just as big of a part in the fight as the weapons and armor. A must read for fans, but even for newcomers it’s incredibly entertaining adventure in to the depths of the deepest dungeon. It’s a nerd fantasy that’ll make you want to go have an adventure of your own, and isn’t that exactly what a successful tie-in of this nature is supposed to be about?