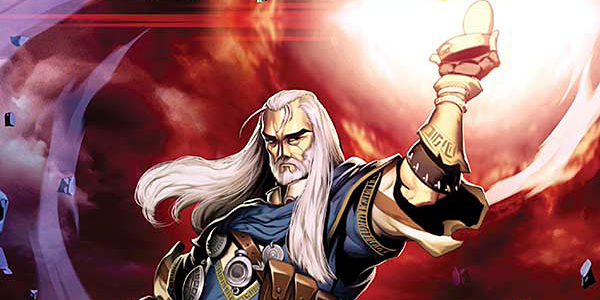 The Pathfinder: City of Secrets arc concludes in #6.  Was the loot worth the danger?

Pathfinder #6 finishes up the City of Secrets arc for the Pathfinder graphic novel series from Dynamite. It’s a competently organized finale, but it lacks the punch of the previous volumes because when you’re dealing with something like Pathfinder, in this particular format, it’s difficult to be able to tell truly epic stories. Usually you’re just telling one very small part of a larger overarching event (aka a campaign). So, this Pathfinder is basically the end of someone’s campaign. There are minor rewards and secrets revealed, and hints at a greater mystery, but nothing is actually solved. It’s sort of like the old TV rule. When you’re dealing with a sitcom, or a similar 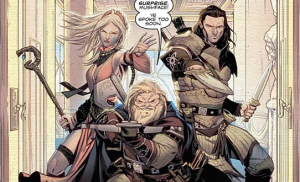 show, you need to make sure that everything is wrapped up and back to normal by the time the thirty minute mark hits. This is fine, because it creates a satisfying solution to a minor problem, that leaves everything open for future conflicts. The only problem is that when the wrap up occurs, it can seem a bit rushed, and a little too neat. Pathfinder #6’s conflict is no different from the past volumes’ (fighting bad guys, uncovering conspiracies, saving allies, etc), but since there’s all the pressure to wrap it all up it doesn’t have the same sense of suspense, of the other volumes. The conspiracy that’s revealed in #6 is revealed to be on a much grander scale than previously thought. Yet the bad guys’ operation is so easily taken care of, that it’s hard to feel compelled to be wary of it as a possible conflict in the future. I mean there’s six characters. But when they’re all together they easily tear through all opposition, so it’s difficult to maintain the illusion that the enemies stand a chance in the first place. If you’re a fan of the characters, and love what they’ve been through so far, you’ll be thrilled with the trouncing they give pretty much every bad guy related to the conspiracy. But without a sense of danger or death it doesn’t feel like the ending is earned. I do praise the different variations in the characters (both in background and ability), and I see that their team composition is designed for strategic importance, but there needs to be a threat to match. Unfortunately City of Secrets did not provide one.

Jim Zub’s structure is still perfectly maintained by the story, which is well told. Leandro Oliveira’s art is just as successful at conveying the setting as always, and the architecture of the city gets a lot more life from the varying settings in this volume, but it never comes in to play in a fight. It feels like during every physical altercation that the characters are transported to a massive, flat, arena-like area with no regard for natural boundaries (kind of like how every Dragon Ball Z fight seems to take place in the same million mile wide crater). It’s a small detail, but one that makes the scene hard to imagine for the reader (how do six people fit in one kitchen sized room, and fight seven guys?). Ross Campbell’s colors keep up with the differences in light from setting to setting, and even the spell effects are adequate, but there aren’t any really jump off the page moments like in the last volume.

Pathfinder #6 does it’s job of finishing up City of Secrets, but takes no chances and pushes no boundaries. It’s satisfying. If you’ve been reading it, you’ll be satisfied, but you won’t be enthralled. It basically all works out in the end, and sometimes that’s just a nice way of saying it’s sort of boring.