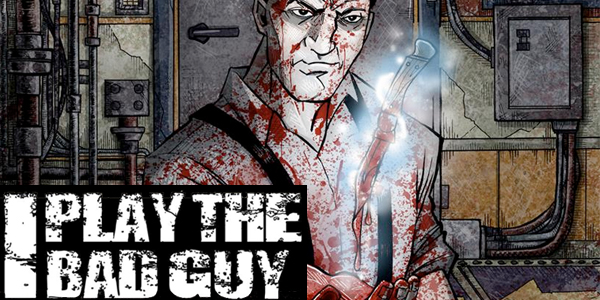 Have you ever wondered what it’d look like to see a human skull explode?

Due out October 29, from Bliss on Tap Publishing, comes I Play the Bad Guy, a new story written by Andy Arnott with art by Alex Cormack. I met Arnott a couple weeks ago at Boston Comic Con, where he and Cormack were enthusiastically selling issues of their new story. After meeting such a nice guy, I was pleasantly surprised at how twisted this tale truly is. It takes a look at what life is like after the fame and glory of being a superhero are gone. Also, it questions how far are you willing to go for the ones you love? Enough to make a friend’s head explode? I may be getting ahead of myself…

The story starts with Grandpa Al and his granddaughter at a grocery store. The young girl waffles too long over which cereal she wants to consume, so her grandfather leaves her there. Then we meet Frank. Turns out he’s the real reason Al went missing, and has him bound to a chair in a nondescript location. These two guys have quite the history together, spending time with the US Military getting to know both themselves and their new abilities. We learn early that Al has control over electrical current, and Arnott shows the reader this by teasing it with the dialogue, then focusing in on Al making a ball of current, despite his restraints.

The story heads back in time to better paint the history between these two. We follow a US Army Colonel and a Scientist down a long elevator shaft and into an underground facility. It is down here where we meet a much younger Frank. He has just caused the crash of an iron girder with only his mind, and is also capable of killing three men simultaneously using his ability to control matter around him. At this point, it’s unsure if he his abilities are similar to Magneto, in that he manipulates only metal, or if his powers surpass the great mutant into full on telekinetic chaos. We also see a much younger Al getting to demonstrate his ability. With a blinding surge of electricity, he fills the panel with blue light causing destruction on a large scale.

After this we jump back to present day, with Frank still standing over a roped up Al. What’s really going on is that Frank is on a hunt for his daughter, and Al knows info, but isn’t talking. So, for the rest of the story, we get a super gory and very heated torture scene. We quickly learn that Franks telekinetic ability works on all types of matter, and with the help of his trusty knife, he’s able to lift a square chunk of Al’s skull. Why? So Frank can prod at his brain of course! Al continues to resist, forcing Frank to keep taking one more step over the line. Ultimately, Frank rips apart Al’s skull in a gorgeous display of power and bloodshed. With his dying breath, Al is able to mutter the word Norfolk, which is all Frank wanted in the first place. So he leaves Al to rot in the abandoned army base and heads for his car. With the last panel we see a military helicopter closely in pursuit.

I Play the Bad Guy is bloody entertaining. Arnott has developed a scenario that allows his readers to question how far are you willing to go for justice and for those you love? If you were given superpowers, would you only use them for the greater good, or would you be like every other human being and use them for personal gain? In I Play the Bad Guy we, the reader, gets to live vicariously through Frank, and feel the cathartic release of angst along with Al’s brain matter when his head finally goes. What truly makes this book so engaging is that Cormack illustrates every painstakingly imbrued panel, filling them with wall to wall action and intensity. The scene where Al’s skull rips at the seams is one that sticks with me, and thanks to these two guys, I now know the proper sound to use when a cranium erupts. Sh-whip! Be on the lookout for this excellent indie book when it hits the shelves in October.