The team behind the graphic novel Joker brings us Rorschach’s long-awaited entry in the Before Watchmen series. Does it do everyone’s favorite psychotic anti-hero justice? Keep reading to find out! 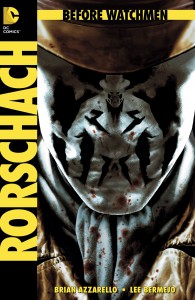 The book opens up with a similar technique to that used in the original Watchmen, but with a clever twist that fits the character perfectly. The “camera” is focused tightly on an indistinguishable red surface and slowly pans out revealing what looks like a Rorschach test made of blood. It works to immediately show the brilliance of Lee Bermejo and his knack for cinematic art, which is only helped by his insanely detailed style. If the writing weren’t up to snuff, this book would be worth buying for the art alone.

Luckily (and unsurprisingly), Brian Azzarello delivers dialogue that perfectly fits with Rorschach’s overly dramatic and dry personality. The notes from his journal are ever-present, and Azzarello made sure that, like in the original, Rorscach’s writing is more eloquent than his speech. I loved the intentional typos on the notes, and the fact that Rorschach would take the time to cross them out and fix them. His horrible attempts at jokes also help to foster the feeling that this is the Rorschach we know and love, just in the hands of a different writer.

There’s a great scene in the book when Rorschach foolishly confronts a gang leader in the sewers, only to get beaten within an inch of his life. His enemies don’t even bother removing his mask because they realize that there’s “nothing that matters” underneath it. The mob boss succeeded in luring him down there, but was disappointed by what he caught. The scene perfectly showed how Rorschach is just a man without any fancy gadgets or superpowers and that he has to face the consequences of his foolish crusade. The end of the fast-moving issue sets the stage for a storyline that should be incredibly intense.

I can’t think of any current artist who could portray this character and his world better than Bermejo. His work is insanely detailed and gritty, and the shadows being cast in all the perfect places in every panel really gives the illusion of photorealism (not to mention the incredible full page spread of NYC from a bird’s eye view). It’s hard not to be blown away by his talent and penchant for cinematic page layouts.

It comes as no shock that this book is fantastic. Brian Azzarello excels at telling stories about morally bankrupt characters inhabiting an equally amoral world, and nothing fits that description better than Rorschach’s patrols around the seedy underbelly of New York City circa-1977. It’s a crime noir story at heart that absolutely needs to be read by any fan of the character. Those who are only familiar with Zach Snyder’s superhumanly strong Rorschach from the movie might be surprised by this more grounded (and faithful) interpretation, but that gives them even more reason to read it.