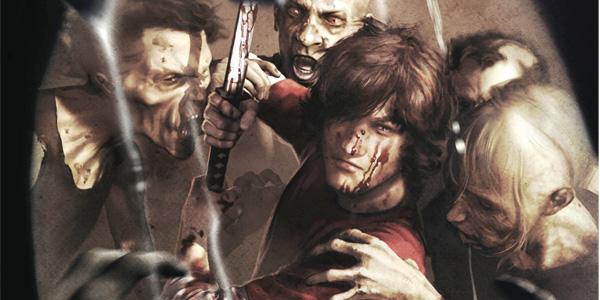 One thing that’s pretty consistent in any zombie apocalypse setting, there is no guarantee the good guys will win.

I mean, I understand that there has to be a fear of death for horror to thrive, but is it sad to think that the prospect of being eaten by zombies has becomes so commonplace that it doesn’t really pop in our minds as horror anymore. We need something new. Something that’s clicks in the now. 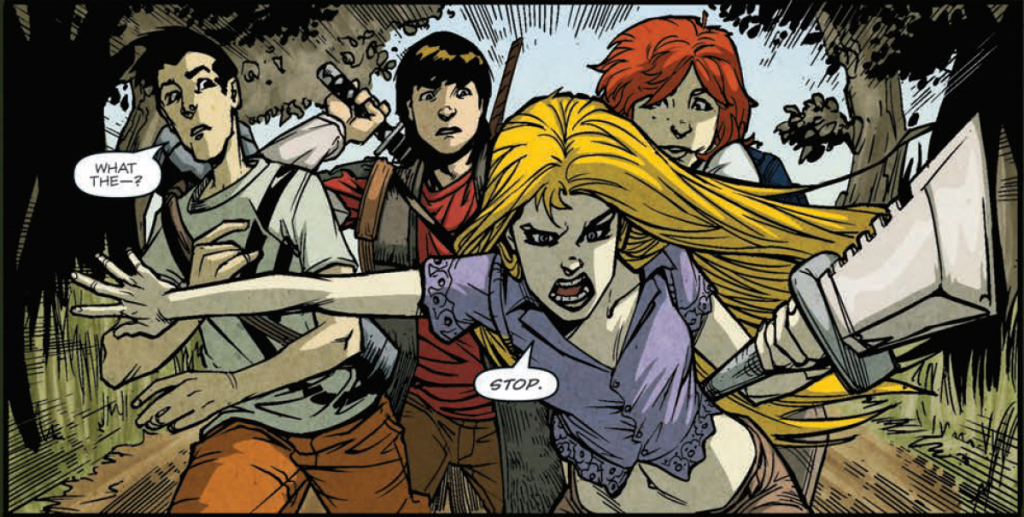 Big “in your face” scenes like this make this issue a lot more fun than it had any business being.

Luckily, this concept translates quite well in Tony Vargas’ art, which transitions between playful and brutal seamlessly, and fits the characters’ unique magnetism. Everything is very polished, but Oliver Lee Arce’s colors are just raw enough to maintain the post-apocalyptic horror setting. The scene layout is easy to follow, and maintains just the right amount of intensity. The angle on each panel (not just the fight scenes) are really dynamic and really make the character’s personalities show in their actions and expressions, giving us a sense of how the character would look and act in reality. The designs of the characters are also really interesting. They’ve been stripped bare and have an incredibly basic aesthetic, but they still have the look and feel of modern teenagers despite the environment. The setting is unfortunately the same middle America near the woods rural town we see in every other zombie adventure, but still fits the overall tone of the characters and story. The most potentially interesting setting of the hospital sadly ends up getting skipped over due to obvious space constraints, but maybe we’ll get to see a little more in the 2nd volume.

There’s a certain whimsy in Rot and Ruin that is missing from the Walking Dead, and that ends up being a significant strength in it’s presentation. Since the protagonist is essentially a kid,, and all of the supporting 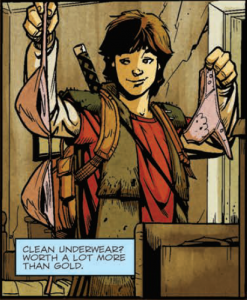 characters are roughly the same age, there’s still a “playtime” sort of atmosphere as they interact, fight, plan, and argue. It’s fun! Maybe that’s not supposed to be the intention, but this is the zombie story you played with your friends, when you were kids. The “Samurai” tag along theme makes for a cheesy, but still somehow unique concept as the gaps in their knowledge on what they are doing and why they are doing it are painfully obvious (they’re kids!). Everything from their weapons, tactics, fighting style, and outfits are all completely impractical, but still maintain the simplicity that comes from a post apocalyptic setting. Jonathan Mayberry writes convincing teenagers, and his dialogue usually hits it’s mark, but never really goes above and beyond expecation. There were a few times when my eyes couldn’t help but be drawn to Nix’s hair as it seemed to change length as the panel’s progressed, it felt like a weird choice in art, but didn’t really distract from the story that much to matter.

At first glance, what you’ll probably take away on your first read of Rot and Ruin (from IDW, Jonathan Maberry, Tony Vargas, and Oliver Lee Arce) is that it’s an attempt to catch a young adult (Hunger Games, Kick-Ass) vibe with the advantage from the popularity of The Walking Dead (cynical I know, but this is a review). Well Dead Heads, the Walking Dead it ain’t…and I couldn’t be happier about it. In fact, all things considered, the most negative critique I can give this first volume of Rot and Ruin is that it’s trying too hard to be another zombie story. That’s it. We’re retreading the same ground with different characters, and with the exception of characters with personality and a surprising ending that I’m surprised I’ve never seen before, it never ceases to be anything more than a zombie story. But try not to think of that negatively. If you like a good zombie story, than Rot and Ruin is still going to make you feel right at home.