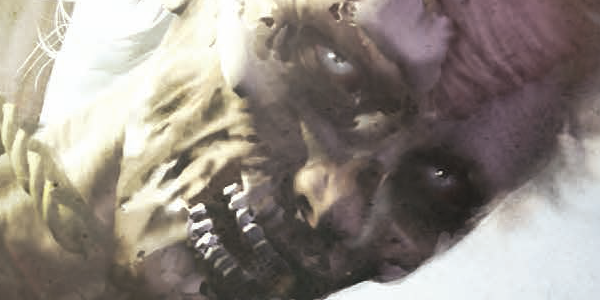 I like (kill) zombies and I like samurai, so there’s no reason that I should be as averse to Rot & Ruin as I find I am. First of all, the series is not bad, and #5 is no exception. It’s not jump out of your seat and cheer “Woo!” great, but it’s not bad. It meets its mark, even if it doesn’t floor the competition. The plight of Benny and his friends is clear, and it’s led to some character development that is understandable to anyone reading. We know why they’re at the end of their rope, and even if we can’t relate to their predicament personally, we can definitely identify with it.

Farmer John is just as difficult to read as ever, with some of his scariest moments being those in which you find yourself, not agreeing with him, but understanding his position. He has a really unnerving plot, and even

Benny seems to be aware of the disturbing level of validity to Father John’s “madness”. Lilah manages to provide another perspective that makes just as much sense as Benny’s and John’s, but with the added bonus of being a bit naïve for her world (they’re kids, after all). There’re a lot of different ways to view #5’s conflict, but unfortunately the conversations about the themes in use will probably be more interesting than their application in the actual story.

Although there’s a lot to be appalled about when you consider the content, these scenes lack the impact necessary to put these ideas to proper use. It’s not quite shocking enough for these concepts to land. So what you’re left with is an idea of what’s *meant* to be conveyed in Rot & Ruin #5’s pages, instead of a concrete realization. I don’t want to say it’s shallow, but it doesn’t seem to want to explore it’s complexities on its own. The story is being told, but it’s only available at face value. This is partly due to the loss of Benny’s inner monologue, which made Rot & Ruin seem like Stand by Me with zombies (that’s supposed to be a compliment). There’s less of a connection to what’s going on without that inside track, and we haven’t had enough time to really connect with them externally. It may sound callous, but we haven’t been with these characters long enough to care about the horrible things happening to them, even though we don’t want them to happen and we know they are horrible due to life experience (and common sense).

This time around Tony Vargas’ art takes some extremes when it comes to facial expressions to pull the most emotion out of each character. Most of the time, it successfully conveys intensity, but sometimes it just feels a bit goofy when it shouldn’t. The fights are just as involved as usual, with a lot of detail and information to provide a complete picture and set an appropriately action packed setting. It’s Arce’s colors here that do the best job when the characters *spoiler* blow up the grainery *end spoiler*.  The tone is apparent by the use of shadows and dark colors to help add definition to the scene and effectively convey the atmosphere. There are some interesting camera angles at work here to get a fair amount of impact out of the shots, and to keep the scale minimized and personal.

Final Word: Rot & Ruin as a series hasn’t exactly been my cup of “BRAINS!” so to speak. I still enjoy its unique take on a zombie wasteland from a teenage perspective, but I feel like the themes at work are being underrepresented by the material. Everything about the series works at ground level with no desire to explore some of the more intriguing aspects of its world or characters. It starts to do that, but wraps everything up physically leaving the mental and philosophical conflict on the ground. Even if Rot & Ruin doesn’t focus on asking or answering the big questions, the end of #5 is satisfying and it fits the characters (even if it feels like the world sort of bends to their will at times). Maberry, Vargas, and Arce have full control over the content and seem to understand each others work enough to give each contribution the proper due. Father John has been a fantastic antagonist, but with more build up, he and his impact on Benny and his friends would have been even more significant.

In short, Rot & Ruin #5 interests with its characters and world, but doesn’t spellbind philosophically. It has the potential to, but it’s content to swing on the monkey bars. While there’s not actually anything wrong with that, it holds the story back from taking off intellectually. If it had more comics to unfold through then maybe that wouldn’t be the case. It’s intrigued me enough to give the books a try though, as the world itself is rife with possibilities; but after all of this, I don’t think comic books were the right choice of medium for this particular story.