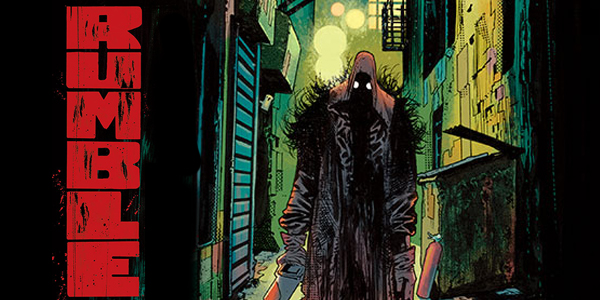 Image Comics wants to know if you’ve heard the one about a badass scarecrow who walks into a bar? He says ow, but not for the reason you might think.

New from Image Comics comes Rumble #1, a story about scarecrow that walks into a bar and gets his brains bashed in with a baseball bat. Lucky for him, there’s only straw where his brains should be. This oddly funny yet dark series is co created by writer John Arcudi and artist James Harren, and they’re working with colorist Dave Stewart. There are some strange creatures popping up around the Rumble world, and an even stranger protagonist to root for.

The Skinny
We don’t learn too much from the first issue, aside from meeting the main players. We see a couple of things pop up, one in an amusement park and another in a swamp, that look like they’ll play larger roles later in the story. Basically the first issue centers around a bartender named Bobby, who thinks he’s being helpful by saving one of his patrons and pulverising the scarecrow. However, in doing so, he opens up a giant can of worms that no one can protect him from. If there were only a savior, that wasn’t so knocked the hell out.

The Good
Much like the story, the art of Rumble is a little strange but very cool. Take for example the expression range on Doc’s face. He goes from a very sedated look when we first meet him, to the over excited screams of panic, resulting in nice visual contrast, as well as captivating story telling. The scarecrow looks pretty damn tough with his dark hood over his vacant white eyes. And the alien things trying to get the sword look similarly twisted. It’s still too early to tell if this is going to be a good series, but if all the issues are as entertaining as the first, I’ll be with them to the last.

The Not-So Good
I got nothing. No spelling errors or visual gaffs that I can find. The pacing is a little strange at times, with the creative team choosing to drag out some scenes and not show others, like Doc getting his hand cut off. However this is just me being picky and looking for something to poke at. Some location tags could be nice as well, but both don’t really affect the story at this point.

The Decision
Rumble #1 is a solid first issue of a strange new story. It would appear there are a lot of people we’ve yet to meet, but in terms of characters to root for, I’ve definitely found one in Bobby. He’s a down in the dumps underdog, just begging for a break. I’m still not positive if the scarecrow is the good guy, but judging by his actions at the end of the issue, it looks like he might be. We’ll see if the straw man is here to help or hurt when Rumble #2 is released on January 21.