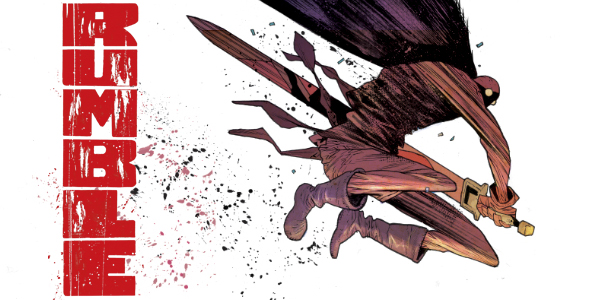 Some Scarecrows want a brain, this one wants bloodshed and a corpse.

Image Comics released Rumble #2 a week or so ago. Rumble is co-created by writer John Arcudi and artist James Harren, and they’re working with colorist Dave Stewart to round out the creative team. The last issue left Bobby facing a pair of demons with his straw filled savior just appearing on scene.

The Skinny
Bobby’s world is rocked by the realization of his surroundings. The people he thought he knew are actually demons and he unknowingly befriended a towering scarecrow butcher named Rathraq with a swing of a bat. And to top it all off he’s found himself up crap’s creek without pants. We also get a little more about Rathraq and his mission of pain, but it’s mostly just him making heads roll.

The Good
Harren and Stewart are working very well at painting an oddly enchanting urban world. The style is slightly strange, giving every page unsettling undertones. This helps to amplify the tension in the tale. The creatures themselves are unusual, and I especially liked Lerna and Mr. Bildad. Chubby…chubby Mr. Bildad. The story has me hooked for more, mostly because these characters are so weird that I need to know more about what’s going on. Lastly, I wanted to point out the great foreshadowing that happens after Rathraq disposes of Billy’s foes at the beginning of the issue. It’s sad to see how close he was to his prize, though he has no idea it’s down there in the sewers.

The Not-So Good
Like I said I really liked Lerna the hydra, which is so cleverly named after the one that Heracles slays in Greek mythology. He is friendly and silly, and just wants to play with the football. When Rathraq gave him a chop, I instantly thought of my dog and the sadness I would feel if someone had done that to my pet. I know, mine is a four-legged furry companion and this is a comic book, but it was still very harsh punishment for jumping up. Knowing what I know about hydras (Marvel has them remind us repeatedly) helps a bit, but will Lerna regain her heads in time to affect the fire fight to come?

The Decision
I’m thoroughly enjoying the style of this story. Both the subject matter and the storytelling are a little strange at times, but it pairs so well with Harren’s bizarre brushstrokes. Given my gripe, I’m still not certain Rathraq is a good guy. He seems hellbent on recovering what looks to be a corpse, which is an odd prize for anyone. Maybe it’s his body? We’ll learn more when Rumble #3 is out February 18th.