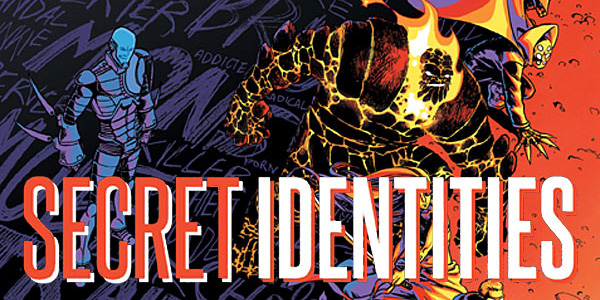 Murder, adultery, intimidation. Anything is possible when no one knows your face.

New from Image Comics comes a look at the superhero condition, and what it does to the person under the cape. The series is called Secret Identities and is created by writers Jay Faerber, Brian Joines and artist Ilias Kyriazis. Helping them on colors is Charlie Kirchoff. The series doesn’t waste any time, sending us straight into battle with The Front Line as they take on an army of demons with the help of a potential addition to their team.

The Skinny
The Front Line are a squad of supes protecting the greater Toronto area. The team is strong, but they find the abilities of a new potential team member to be a much needed addition. Where this story gets interesting is when the heroes are done fighting and we catch a glimpse of what their personal lives look like. Each battles with a different folly of the human condition, and unbeknownst to them, there are forces building in the shadows that threaten to expose them to the world.

The Good
I should start off by saying I tend to stay away from capes and cowls because I usually find the stories less unique and stale. This series, however, has piqued my interest by taking an alternative look at the life of a hero. Similar to how Sundowners questions the mental state of a team of superheroes, Secret Identities looks at the dark personal lives of those sworn to protect the greater good at all costs. Some are worse than others, but they all leave something to be desired. The art for the first issue is pretty good, what you’d expect of a book of this caliber. I thought it was particularly cool that the team made the war town chest cavity of a sentinel-looking killer robot their base of operations, and the panel layouts offered a decent array of size and placement which made for good visual variety.

The Not So Good
I’m skeptical that I’ll make it through the entire run. The characters seem interesting, but they all feel too familiar. I imagine it’d be pretty difficult to come up with an original looking hero at this point, but these guys look like they are all an amalgamation of current heroes. Like the child of Johnny Storm and the Thing or the girl who looks like she really could be the daughter of Mockingbird and Hawkeye and she has the bad jokes to boot. I thought it was interesting the writers decided to give us as much info as they did in the first issue, given the way Crosswind behaves and who he’s talking to at the end of the issue. That being said, it doesn’t help me to care about a bunch of hypocritical heroes that live double lives to suit their needs may wind up exposed.

The Decision
I’m on board with this series for the time being. After the first issue, I’ve seen enough dirt on these people that I’m interested in seeing their downfall. Truth be told, it was hard for me to decide which side I was on, and who was the bad guys. I’ll be back to see if The Front Line is able to sniff out their Benedict Arnold before it’s too late when Secret Identities #2 comes out March 18th.