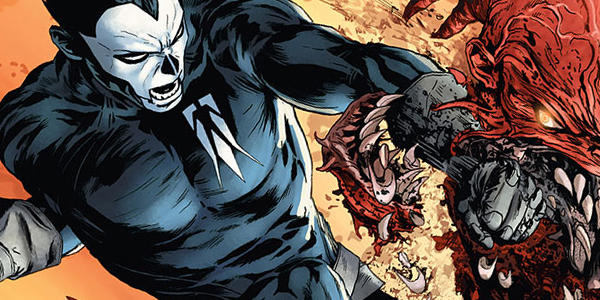 You just gotta love Valiant.  Their “Summer of Valiant” launch event seemed to come out of nowhere earlier this year and has proven to be the best thing to happen to comics since…well, since Valiant’s original founders created their amazing universe twenty years ago.  With the sophomore release of Shadowman, the latest addition to their monthly catalogue, Valiant once again outshines the competition and delivers this week’s must-buy book.

Following the events of the debut issue, Jack Boniface has involuntarily accepted his birthright.  On the verge of death after being kidnapped and shot in the back, he bonds with a powerful voodoo spirit known as a Loa and makes his first transformation into the new Shadowman.  Shortly after, the Abettors, Dox and Alyssa Miles, join the fray and help Jack fight off Mr. Twist’s demonic forces.  First though, readers are treated to a brief respite when Dox discusses Necromantic Energy, an important concept in the Valiant Universe going forward, while calmly and methodically etching magical symbols into his bullets.  I couldn’t help but be reminded of the scene from Scorsese’s classic Taxi Driver in which the troubled Travis Bickle carefully cuts notches into all his rounds.

To that point, the way the entire issue plays out seems like it was pulled straight out of a movie.  From the dramatic perspectives and intense visuals to the gripping dialogue and occasional snappy one-liners, Shadowman seems destined for the big screen.  Complimented beautifully by rich color work by Brian Reber, Patrick Zircher’s fantastic artwork practically leaps off the page and makes sweet love to your eyeballs.  The grotesque Mr. Twist is brought to life so believably, you can practically smell the dead flesh he was assembled from and feel the anguish of his hapless victims.  Indeed the villains in this story are quite creepy and really evil.  We learn that supreme baddie Master Darque, who was briefly introduced in issue #1, is still very much alive and vying to return to our world – dispatching Twist to personally deal with the one man who can stand in his way…

This of course leads to one hell of a cliffhanger ending that will leave you eagerly anticipating the next installment.  Writers Justin Jordan & Patrick Zircher continue to deliver perfectly paced installments, rife with bloody action and even some dark humor, that are hugely entertaining and leave readers wanting more.  It also introduces a great supernatural horror element to Valiant’s brilliantly multi-faceted universe that really makes the title stand out.  Shadowman is a knockout book and any fan of quality comics will absolutely want to grab a copy today.