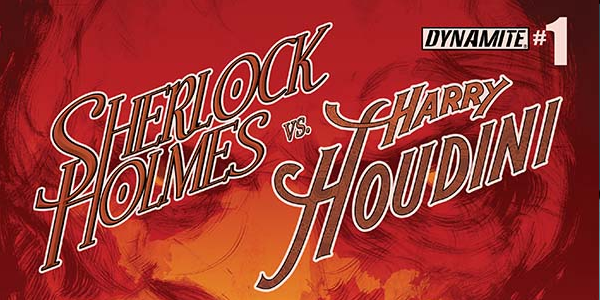 Here it is! The moment that no one was waiting for! Sherlock Holmes, the famous, genius, fictional detective; versus the very real, late master of escape, Harry Houdini! …and it’s surprisingly good.

Well in this universe Holmes is just as real as Houdini, so that makes things a little bit simpler. 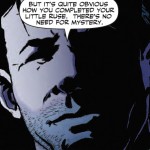 During a press event for an escape trick at Scotland Yard, Harry Houdini meets a very hungover Sherlock Holmes who is sitting in a nearby cell and easily ascertains the method of his miraculous escape. Houdini admits the method to be correct, but requests Sherlock come to a show that he is hosting in order to give him another chance to pull one over on the famous detective. The challenge is interrupted by the sudden appearance of floating demons that warn Houdini against mocking real magicians and then disappear. Who controls these demons? Will Sherlock accept the challenge? Can Houdini pull off an escape so impressive that not even Sherlock Holmes can deduce how he did it, and most importantly is there such a thing as supernatural power? Find out in Dynamite Comics’ own Sherlock Holmes VS Harry Houdini!

Sherlock Holmes VS Harry Houdini is written by Anthony Del Col and Conor McCreery, and illustrated by Carlos Furuzono with colors by Aikau Oliva. At first glance it seems like a strange pair to pit against each other, but it is true that Houdini did dedicate a pretty significant portion of his life to exposing frauds and the pursuit of practical solutions. This is a theme similar to many of those found in Sherlock Holmes’ mysteries, but it was more of an intellectual and scientific pursuit, rather than Houdini’s focus on practicality. This similarity in goal, but difference in approach, actually makes them work as a team surprisingly well. But they aren’t a team, are they? It’s called Sherlock Holmes *VS* Harry Houdini, after all, and that is where the issue absolutely kills.

The demons showing up is completely glossed over by Houdini and Holmes, who see each other as the other’s only worthy adversary in the room. They don’t take the demons or the warning seriously at all. Houdini was known as a bit of a perfectionist, show-off, and an egomaniac.

They play off each other’s arrogance in any way possible, not matter how petty. They never pass up an opportunity to jab at the other’s pride, dealing out plenty of gut shots (…ahem.) to each other’s dignity. It keeps this battle of wits from escalating to any epic level by reminding the audience of how human each character is (despite their superhuman level of talent in their chosen trades), and also how immature t 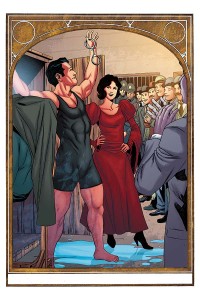 he rivalry is. Another aspect of this work is how much it emphasizes the often overlooked importance of Houdini’s wife Bess. She constantly acts as Houdini’s sheath, encouraging his confidence, but reminding him of his limits. She stands by her husband and his choices, assists him in his illusions, and keeps his feet on the ground; all without compromising her own incredibly strong personality. She’s an important character that stays consistently important throughout the volume. I only wish Watson had been given the same level of focus.

The art is incredibly competent and keeps up with the time period well. Carlos Furuzono’s characters display a great deal of personality that shows in excellent close up shots. These details get glossed over when at a distance, which is to be expected though. There are a few strange moments where the perspective shots look too flat, and the facial features change location on the head, but they aren’t problems you’ll notice if you aren’t looking too closely. It’s Aikau Oliva’s colors that really make the art pop though. There are the obvious differences in skin tones and muscle definitions that will definitely draw you in, but more than that it’s the shading on little things like the bone structure of a character’s face, to the shadows that are created by slight differences in light. It creates a realistic tone, but uses very faded colors and a limited palette as well. These little details in soft light and shadows, not to mention simple hues builds on the atmosphere to convey an early 1900’s look more successfully than most stories set during the same time period, by using the theory that less is more.

Sherlock Holmes VS Harry Houdini takes it’s first step forward, and for the most part it’s pretty successful. Not a lot is actually going on in the first volume, but the ending hints at a much more involved story that will most likely be taking place in later volumes. A lot of research was done on the characters to making them as close to their original counterparts as possible, but it also reveals how much they have in common with each other, creating an interesting amount of friction between them that actually manages to be entertaining, whenever they find themselves coming to intellectual blows. The art conveys the time period, as well as the personality of the characters, successfully. Nobody looks too similar, making it easy to keep track whenever there are multiple figures in a panel. There’s not a great deal of action, but that works *for* the story instead of against it 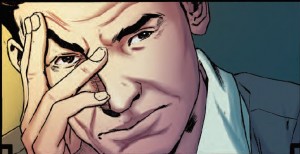 . The fact that the emphasis of the action has been put on mystery and illusion instead of fights and stunts proves the writers and artists are dedicated to providing a story that pays homage to both characters while still maintaining an entertaining and suspenseful narrative worthy of a mystery story. A worthwhile read for fans of either, or both.