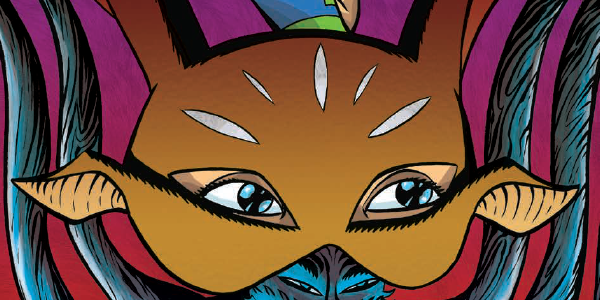 Sinergy #2 expands on it’s world, but due to poor plot pacing and a lack of focus, it fails to captivate as much as it’s premiere issue.

So far, Sinergy’s greatest strength has been it’s characters, and #2 is no different in that regard. Oeming and Soma have worked together to bring tangibility and wit to the character of Jess. Her struggle with passing from adolescence in to adulthood is perfectly mirrored by the emergence of her abilities and overall lack of any reliable guidance relating to either. While it’s not the first story to create this kind of parallel, it’s one of the best uses of it, by weaving an entertaining fictional narrative that simultaneously serves to be relatable. The story focuses primarily on Jess, which definitely ties the reader to the character and makes her struggle seem that much more personal, but information is still needed from other characters’ perspectives, which are unfortunately not nearly as engaging. It leads to a bare bones exposition from the supporting cast where the only time that a character besides Jess becomes the center of attention is to divulge a very small piece of information that serves to benefit the reader’s knowledge of the world of Sinergy, and then it goes back to Jess. That style doesn’t provide the same level of involvement as the scenes featuring the heroine. It give the impression that the story has poor exposition, when in all actuality it’s the pace that damages the narrative the most. Jess story starts a brisk jog, then is suddenly stopped while the perspective changes for barely a page or two, and then it goes right back to her. The scenes change far too often for a story of this scale, and sometimes too abruptly to immediately know there’s been a change. It’s a little disorienting to read.

It still has the same great visual style. The neon hues create a unique and artistic vision of the world, and Oeming plays around with some of the panels to reveal hidden aspects of some of the characters (namely, the monsters) in an interesting way. The plot itself is just as good as it was when it started, with Leaf and his 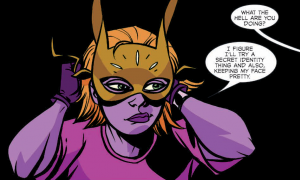 like getting a little bit more space on the page to build their antagonistic relationship with the Seers, and Jess’ reactions to her awakening is surprisingly down to earth and refreshing but with a teenage level of judgement, making sure the primary themes of growing up and maturing aren’t overpowering in their message. Sinergy continues to be good in #2, but it’s not told as well as it could be. Jess is the part of the story with the most feeling, making it easily relatable; but sadly that makes the rest of the story seem dry and, by comparison, devoid of empathy.