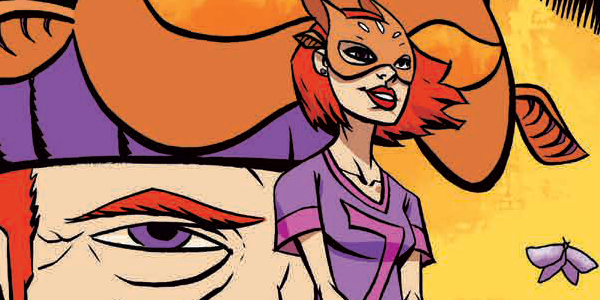 Wow.  Talk about in the thick of it.  Jess goes on her first solo hunt and discovers she’s still got a lot to learn.  Sometimes you can just read something, and instantly picture it happening in your head like you were watching a movie or tv show (you can even hear the music that’s playing).  That’s exactly where Sinergy #3 starts out.  It commands such a detailed and high octane beginning, that it just flies right at you from off of the pages.  It’s absolutely exhilarating.  Though 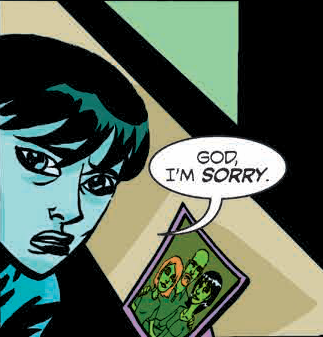 I’m not sure when Jess decided to hunt monsters full time, exactly…

Once it slows down, the plot chugs along at a steady pace; but the banter keeps up just as consistently.  It gets a little exhausting to be honest as every character or group of characters seems to be equally witty and sarcastic (like a Tarantino movie).  The aspect definitely fits it’s own style well, but it can create an alienating feeling for the reader when attempts to relate are met with pretension.  I also have the fear that one of the most real characters of the series is being pushed to the sidelines as she is quickly becoming superfluous.  Of course things pick up in to overdrive again once another fight breaks out, proving that the series handles action phenomenally.  The highly stylized art, not to mention the very particular color palette, makes these scenes shine.  I was also pleasantly surprised by the finale this time aorund, which sees Leaf and his group on a mini-mission of there own.  A lot is revealed about the rules of their world through exposition, but it’s how human their interactions with each other are (we’re talking about the monsters now) that makes the scene so engaging.  They talk back and forth like old friends, and even bumble around like junior mobsters, to incredibly comical effect. 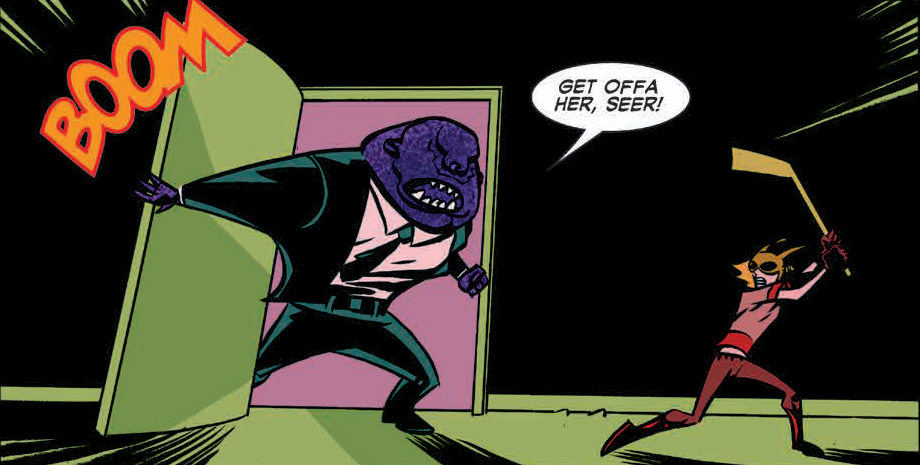 Scale emphasized by distortion. Oeming’s style is so cool.

Final Word: Sinergy #3 brings it’s best action to the table, delivering a Buffy/Hit-Girl-like heroine who’s too animated and erratic in her style, speech, and fighting to not be drawn to.  The moments involving the side characters are much more robust this time around, making the sidetracks worth the time, as well.  The final scenes involving Leaf and his cohorts are absolutely priceless.  They’re funny and informative, and fit the style of the comic well.  But it’s still the fight scenes that win the issue.  The art, the dialogue, and the irreverence of both of them together creates such an incredibly stylish and borderline cartoony atmosphere that it’s hard to not get pulled in to the gleeful immaturity and simplicity of it all (There are monsters.  Jess is going to kill those monsters).

Sinergy revels in it’s irreverence, making it annoyingly self-aware, but it also takes so much pride in all of it’s immaturity that it’s also impossible not to love.