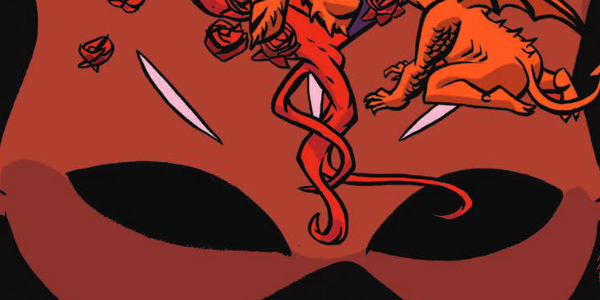 Sinergy #4 is nothing if it isn’t revealing. I’ve gotta admit that the loss of the energy displayed in #3 is certainly felt, but getting a little more insight in to their world as well as learning some valuable staples of their reality will most likely be very beneficial going forward. It’s a little exposition heavy though. And by a little…I mean a lot. Oeming and Soma keep the story from going overboard though. Control is maintained consistently, keeping the framework for this particular volume solid. There’s the occasional joke thrown in here and there to keep things 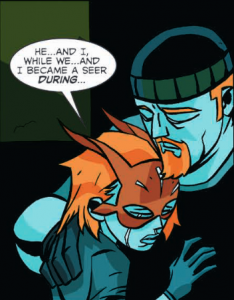 from getting boring as well, but the banter is significantly toned down to allow for more world building. I’d say the highlight of the issue is the cat and mouse game that both Jess and Leaf seem to be playing. It’s makes for an intriguing, sweet, and complex like (not really love…) story that seems to have taken center stage.

Beyond Jess’ perception we’re also treated to Leaf and his gang as they bumble their way through an incredibly ambitious plan (like an evil version of the Three Stooges), Jess’ mom as she begins to unravel the truth about her husband’s secret life, and the cops of course who are just scratching the surface of knowing not a damn thing. All of which are filled with sarcasm, snark (is that the same thing?), and humor; but a much more movie and book quality of sarcasm and snark rather than a true to life one. The conversations are snappy and quippy and move a little too quickly, as per usual. It fits the pacing though, which despite being quick witted, also gives you enough time to absorb the details of the story and its characters.

Final Word: Sinergy #4 is fast, but subtle, smart but playful, and mysterious but consistent. It’s such a damn joy to read and Soma and Oeming built a really small scale but immersive atmosphere, with a unique and eye catching color palette and Tarantino/Smith (of the Kevin variety) levels of dialogue and wit. It doesn’t have that real jump out of your seat and air guitar for the main event scenes like #3 did, but the amount of information fed through about the setting and its rules as the story progressed was delivered infrequently enough to keep me engrossed in the multiple storylines, all of which were all highly relatable and equally represented.  Yet the main line was thorough enough to make sure I was completely caught up with the time the comic reached the end. It’s true that I miss the guitars, but I know they’ll be back, and it’s good to take a break to breathe once in a while. The fact that Sinergy #4 understands how to do just that without losing traction shows just how expertly Taki Soma and Michael Avon Oeming are holding its reins.