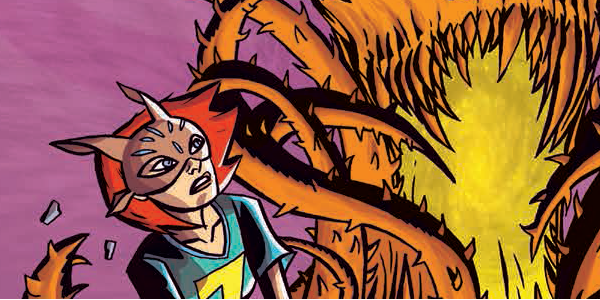 Sinergy has been a pleasant surprise from Taki Soma, Michael Avon Oeming, and Image Comics.  Part coming of age, part supernatural, and with a clever sense of humor.  You could call #5 the payoff.  The thing that makes the whole series worthwhile.  Unfortunately, when you spend all of your time being clever and having fun, the ending kind of sneaks up on you.  Which is what happened here.  It’s not that Sinergy #5 dissatisfies as an ending, it’s that it has so much to catch up on.  The end would have worked a lot better for a longer series, but there are a lot of moments in the climactic final battle that fail to deliver the appropriate level of gravity due to a overall lack of information.  Characters die whose name I didn’t even know, and it’s clear that the story really wants to make me feel it, but I just don’t.  Virtually no time is spent developing these characters, beyond some personality revelations that occur within the narrative, so there’s virtually no insight in to their actual person.  These are characters, not people.  The focus on their quirky dialogue and actions doesn’t make them seem real, and that was a tangibility that was needed to sell the emotional side of this conclusion.

Final Word: Beyond that, some interesting plot points occur, and while Jess and her family’s story is just as relatable as always, the rest is cheapened by the complete lack of the perspective from the monsters.  Even though this particular part of the story has had a lot of development over the volumes as we got to experience the flip-side of the protagonists’ struggle and get a more rounded view of the conflict.  Then there’s the fact that everyone seems to end up in the same place at the end, despite a flimsy set up to get them there.  All this with a cheap fight that showcases some decent art, but nothing on the level of volume 3 makes this particular volume satisfying, but not all that effective.  I still dig the hell out of Sinergy because it has a great personality, a distinctive art style, and good sense of humor; but this ending tries to leverage an emotional draw that it just doesn’t have.  The emotions relating to Jess and her family hit pretty hard in the feels, but the Vegas crew just isn’t able to carry the weight that the story heaps on them.  Satisfying ending, but I feel like it could have been even better with more development.