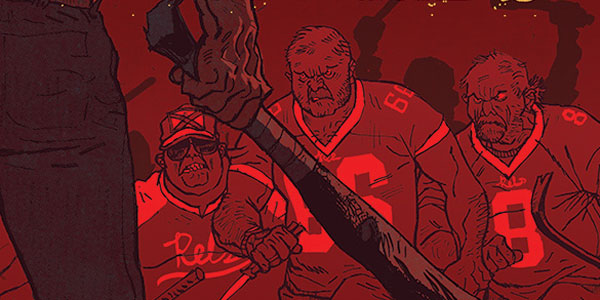 Image Comics’ Southern Bastards is a dirty, violent trip down South, worth taking.

I’m from New England. Born and raised, so my knowledge and understanding of the Southern parts of the US are limited. If all I had to go on was the portrait that Jason Aaron and Jason Latour, with the rest of the Southern Bastards team, paints of Alabama, I’d never go there again. It seems our main character, Earl Tubbs, would agree. However, I will gladly read anyone’s story who is humble enough to illustrate a dog dropping a load on their title page.

The story is all about Tubbs traveling back to his hometown of Craw County, Alabama to sell his uncle’s house and clean up some old family business. This introductory story is comprised of present day doings mixed with childhood flashbacks, all to help the reader better understand our protagonist Earl. We learn all about how badass Earl’s father was, and how he used a baseball bat signed by old-time baseball legends to sheriff a town and beat the tar out of any man that stepped his way.

The story slowly builds, ending with an impending altercation between Earl and a group of roughnecks run by the story’s main antagonist “The Boss”. Not much is known about him, other than that he appears to have deep pockets and high influence. Oh, and Earl is in the process of retrieving that bad ass baseball bat I was telling you about. My assumption– guys will be spitting chiclets by the third page of the next issue.

The gritty landscapes are made more haunting with the addition of rough, almost ugly townsfolk. Aaron and Latour don’t glorify the South, but they don’t bash it either. Ultimately, you get the sense that this duo knows their heritage and are proud of it. With an honesty similar to Ennis and Dillon’s Preacher, Southern Bastards engages the reader, pulling them into this dark Southern world, and appeals to their carnal need for violence.