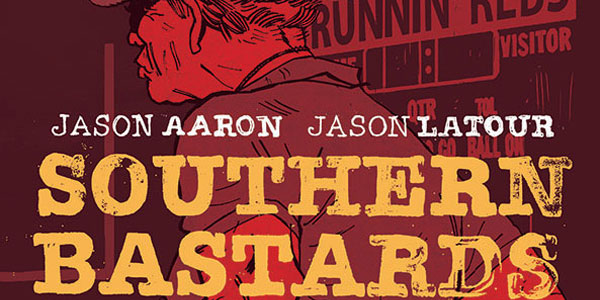 I headed back down to Alabama with Image’s latest offering from Southern Bastards. The team of Jason Aaron and Jason Latour continue their brooding depiction of life in a dark part of the south in #2, with the action centering around Earl Tubbs.

Tubbs’ father, Bert, was a hard-ass lawman of his day that kept the crooks of Craw County, Alabama at bay with his mighty wooden baseball bat, signed by every hero in early baseball history. Note the key word of was in that statement, because Bert is currently buried six feet deep, and that baseball bat grew into a giant tree, which now sits as a fitting headstone for his grave. Fitting because, like Bert, the tree is tougher than tough. When we pick up with Earl in issue 2, we find out that his efforts at the end of the first book were moot, having barely scratched the bark with his ax.

I liked how the writing team is letting the story build a nice ember before erupting. We get to meet Coach Boss, who seems to be the most well connected and influential person in the county. He is introduced doing what he’s best known for, coaching the high school football team. Like Earl says in the book, “there’s not much else a body can do the pass the time on a Friday night in Craw County.” Integrating the game into the pages of the book works so well for this story, especially given that most of Coach Boss’s henchmen are on his defensive line. Also, as is stereotypical for that region of the country, football seems to play a major role in the town. We learn that even the sheriff played for Coach Boss and seems to be in his pocket.

Ultimately, what was best about this story is how much you learn about Earl Tubbs. Without giving too much of the plot away, Earl is pushed to finally make a decision as to if he should just put it behind him or stay and pick up where his dad left off. We see him screaming at the tree that sits on his father’s grave, arguing with himself that it’s not his problem. Then a massive lightning bolt splits the tree exposing… you guessed it… the mighty bat.

I can’t wait for issue #3 of Southern Bastards. We’ve seen Earl’s abilities to protect himself, and his skills at swinging a fry basket into someone’s face, but I’m ready for bat-smash-skull baseball time. I’m not sure who Earl will start with, but with the way this story is heading, I doubt it’ll stop at one.