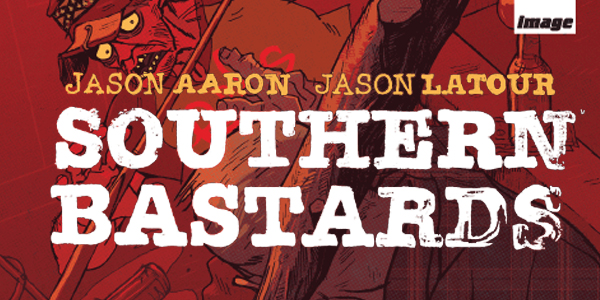 Southern Bastards #3 continues its brooding tale about southern justice, but now Earl has a stick.

Jason Aaron and Jason Latour are back at it with Southern Bastards #3. Put out by Image Comics, the next installment in this brooding tale about southern justice, starts with a recap I really liked at the beginning of the book.  I thought it framed the story nicely.

“After more than 40 years away, Earl Tubb came home to Craw County, Alabama to find an old friend in trouble and a tree growing out of his father’s grave. Then that friend got killed. And that tree got struck by lightning. Now Earl has a stick. And some questions he’d like answered.”

Southern Bastards #3 opens up with a quick flashback, then the obligatory dog turd, then it’s stick time. Earl is still pissed off about the death of his buddy Dusty, at the hands of Coach Boss and his cronies. So Earl heads down to the Coach’s restaurant, and finds Esaw & Materhead, two of the Coach’s top buffoons. It don’t take long before Earl gets to swinging that gnarly stick of his, crackin jaws down in Craw! Latour draws a great panel about 8 pages in of Earl swinging for the fences with Esaw and his cola flying out of the panel. Despite what release Earl feels after handing these two knuckleheads their butts, he soon realizes he may have bitten off more than he can chew.

Earl tries to rally some town support, but in unhappy to find only his young neighbor Tad, who won’t stop busting his chops about cutting down the tree, is the only one that shows up. Aaron interjects some foreshadowing here with the conversation between Earl and Tad. Earl is concerned that anyone close to him will feel the same hurt Dusty did.

In a slightly related note, I love the t-shirt designs Latour is adding to the scenes. They’re subtle and not an integral part of the scene, but seeing a chicken screaming Kiiiyah! wonderfully breaks the tension surmounting in the plot. I would also definitely buy a shirt with a black bear, in an eye patch and suspenders, shooting an AK-47.

The story closes with Earl camping out in the woods. He’s decided that it’s safer out there than in the house, and he’s having another conversation with an answering machine. Aaron has added this to all three stories thus far, but gives us no inclination as to who Earl is talking to. By the sound of the dialogue, it suggest that it is or was someone close to Earl at one point. Aaron uses it as a nice way to recap the plotline, and give a little insight past the rough exterior of Earl Tubbs. Earl becomes full bodied when scenes like him smashing faces with his stick contrast nicely with him pleading with the answering machine to “just hear your voice”.

As Earl suspects, the house was not the best place to be. Too bad little Tad wasn’t told. A gang of thugs lead by Esaw & Materhead show up to dole out some retribution only to find a little kid watching TV in a big empty house. Then, as if you needed any more reason to detest the antagonists in the story, they go ahead and give you a whole new set of reasons to hope Earl breaks their teeth out.

Southern Bastards #3 successfully maintains my interest in this series. Aaron and Latour give you just enough meat to make you want to come back for more. The story is gritty, suspenseful and basically just fun as hell to read.