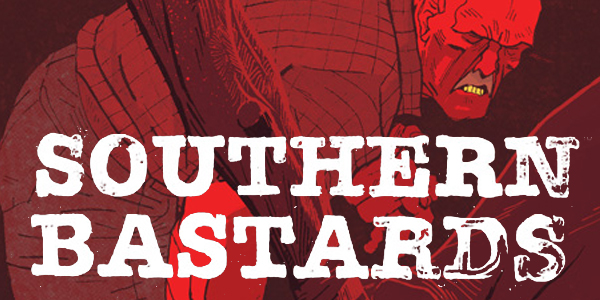 Image Comics released Southern Bastards #4 today, which is the end to the first story arc in this series. Written by Jason Aaron with art & colors by Jason Latour, Southern Bastards #4 is unsatisfyingly awesome (what the what!?). Like the ones before it, this issue is filled with blood soaked vengeance brought on by a mighty switch. Unfortunately, Aaron and Latour grimly remind us that in the real world, the good guys don’t always win.

Southern Bastards #4 opens with a flashback to Vietnam. We see a much younger Earl talking to a fellow soldier about life during war. It’s pretty clear from this that once Earl’s home was so bad that he preferred the uncertainty of Vietnam over the comforts of home. He couldn’t stay away forever though, and finally found his way back home when he was asked to go pack up his family’s old house in Craw County. We find Earl in the present sitting on the front stoop of his ransacked house. We can see the damage that Coach’s crew did to the house, after they beat up on Earl’s little neighbor. They broke a lot of stuff in his house and wrote some pretty nasty graffiti on the walls. After this we see what Coach Boss’s boys did to Earl’s little boy neighbor, who is currently in a sedated state in a hospital bed. Then, once again, we see Earl leaving a message for someone, but we still have no idea who is on the other end. The message is clear though, Earl isn’t scared. He’s pissed and hungry, and headed back down to Coach Boss’s bbq joint for some ribs.

Before Earl even gets to the door, he’s stopped by the local Sheriff. We saw in earlier issues that even the Sheriff is on the Coach’s payroll, or at least under his protection. Earl’s resolve is too strong though, and he calls the Sheriff out for not doing his job. Once past him, Earl is again stopped before he gets to the doors, but this time it’s by Coach Boss’s croney Esaw. And Esaw isn’t alone. The two men argue loudly before the crowd that has developed around them, both brandishing baseball bats and bracing for a brawl. Earl tries to plead with the good people of Craw County, trying to play to their inner kindness. The only thing Earl gets in return is a rock to the head. It’s beginning to become clear that no one wants Earl around, but he don’t care. The two men engage, crossing bats while looking like Obi Wan and Vader, but it doesn’t take long for Esaw’s backup to jump in. The next 24 panels open up into bedlam. Latour makes the decision to depict events in a small pattern of closeup cells. We see a combination of the fighting, mixed in with some flashbacks to football and Nam and Earl slipping the bra off of some woman ending with a shot of Earl’s father standing tall, but when the dust settles, once again, it’s Earl and his switch that walk away.

It’s all lead up to this. Once inside the bbq restaurant, Earl meets face to face with Coach Boss. He demands answers, but Coach Boss says he only cares about football. The two men argue a bit more, and Coach tells Earl to go home, to which Earl replies that he is home. Then Earl remembers who this little weasel was. A scrawny kid that always wanted to make the team, but never did. He got picked on and tormented by the same team Earl captained, and when Earl brings it up, it sends Coach off the deep end. The two men start fighting, which quickly spills from the restaurant into the streets. They trade blows, spill blood and fight for the upper hand. Then, ultimately, as Coach is standing over Earl, in front of all the townspeople that has congregated at the restaurant, he tells Earl that he is the answer, and delivers a deadly looking blow with Earl’s own switch. The Sheriff just watches as Coach walks off, holding Earl’s blood soaked bat in his right hand. Earl is left cold looking, on the ground, with his phone finally ringing. As the story closes, he never answers it. Honestly, my heart sank as the credits began to roll. I was upset for Earl that he never found his retribution, and sad that it looked like he met his demise before saying goodbye to whoever he was trying to call.

With a turn of the page comes answers. In the epilogue, we get to hear who was on the other side all long. It makes sense why Earl was having a hard time getting through, seeing how who he was calling is currently serving as a US Marine in Afghanistan. But we learn with a few words that Earl was trying to reach his daughter, who I’m sure won’t be happy to find out what happened to her Daddy.

I can honestly say that I didn’t see where Aaron and Latour were headed with this one. I won’t say that I didn’t have my suspicions that Earl may have to die, but him calling his daughter in the Marines was a curve ball. Up until the epilogue, I was bummed how the story ended. But having her out there brings hope. Maybe Earl’s not dead, and the two can wreck faces side by side? Either way, it seems like vengeance is going to be a ways off. The series is slated to continue in October, with a look at the history of Craw County through the eyes of it’s most feared man. Coach Boss. I’ll be running back to the comic shop to get my hands on Southern Bastards #5 as soon as it hits shelves.