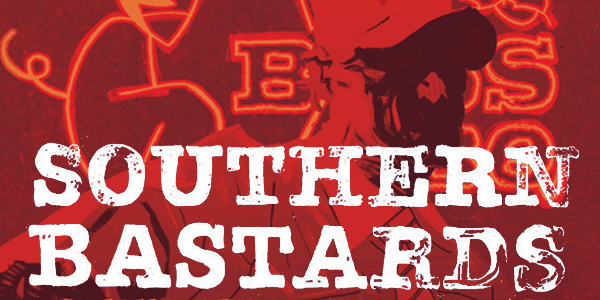 We head back down south for some insight, a funeral and some delicious pie as Southern Bastards #5 takes a look at what makes Coach Boss so bad.

Last week saw the next installment to the gritty tale of southern justice released by Image Comics. Southern Bastards #5 is written by Jason Aaron with art by Jason Latour. This crime story from the deep south picks up right after the sad events of issue #4. If you aren’t caught up in the story, then stop here, because some major stuff went down in the last issue, and this issue spends it’s whole time focused on those doings.

Ok, so if you decided to read past the spoiler alert then it’s your own damn fault. Holy hell Earl Tubb is dead. The intro we get, states that Earl thought he could clean up Craw County with a big stick. He was wrong. Craw County, Alabama belongs to Coach Euless Boss, but it wasn’t always that way. So the first thing we see is a young, kinda scrawny kid in full football gear, working the sled while being prodded by some naysaying coach. By the second page you see the deep stare that belongs to Coach Boss, and can put together pretty quickly that we’re in a flashback sequence. It appears Boss pulls his inspiration for destruction by the doubters around him, which could be why Earl never really stood a chance.

This issue jumps back and forth from the football field in the past to modern day doings a few times throughout the issue. Given the size of his house today, it’s clear Coach Boss is doing pretty well for himself financially, but he appears a bit lonely with the sight of a bed half used and a closet half full. In any event, it’s the morning of Earl Tubb’s funeral, to which Coach Boss is getting ready to go. When Esaw & Materhead walk in they all but choke at the sight of the Coach’s trophy. He has Earl’s bat resting atop his kitchen counter, which makes the boys very uncomfortable. Coach, however, could give a damn. He dismisses any thought of getting rid of it or any second thoughts on attending the funeral. I mean he is the reason everyone’s getting together, he might as well go say hello.

Down at the cemetery there are few people in attendance as they lay Earl’s bones to rest. Basically it’s just the Sheriff and a priest until Coach and his cronies show up, which pisses off the Sheriff. What really set the Sheriff off is Coach Boss’s blatant lying to Earl’s uncle. Uncle Tubb, a poor old guy confined to a chair, feels awful for bringing Earl back home to take care of his house, but Coach tries to console him. He says no one’s quite sure what happened to ol’ Earl, but he thinks the Sheriff is sure going to get to the bottom of it. This doesn’t sit well with the Sheriff, who leaves, but not before shooting the coach a silent scowl. We learn a little more from Uncle Tubb about Earl’s daughter Berta, who we saw at the end of the last issue. I’m still hoping she comes to town and splits some heads, but I’m getting ahead of myself. In one last spit in the face to poor Earl, Coach offers to pay for his tombstone, and jokes about how his father’s said here was a man, so Earl’s should say here wasn’t. Also, in a quick back and forth between Coach and Esaw, we learn Earl isn’t the first guy Coach has killed.

Jump back to the past where we see Euless “Useless” Boss being bullied by the older guys on the squad. It starts with just name calling, but it doesn’t take long for baby Boss to get upset and start swinging for jaws. He gets one guy with a solid shot, but three on one proves to be too much for him and he’s forced to take a full tube of icy hot where the sun don’t shine.

Jump back to the present where we get a series of panels all about how much control Coach Boss really has over his community. He rattles off a few names of the towns heavy hitters, including the mayor, some bankers and the Sheriff and we get some visuals to go along with it. Interesting here is Piney and the friends down in Mobile who both seem new to the story, and could provide very interesting altercation points. But the ultimate show of his power comes right before the last page, where Coach walks into his BBQ joint and hangs Earl’s bat on a shelf for all to see. Then he gives everybody in the restaurant a piece of pie, which they all have to eat together. Coaches orders. The last page shows a beaten down Euless pull himself from the turf, grab his helmet, then continue hitting the sled.

Southern Bastards #5 continues to be a heavy hitting story of southern fried retribution. It seems everyone has a chip on their shoulders, some reason to want to make the world pay. It’s interesting how just learning a little backstory on a guy as wicked as Coach Boss makes you feel for him, just a bit. I love the art that Latour is creating for this series. Brush heavy illustrations colored with a gritty texture to add to the emotion of the storyline. I especially like how the typography is working, adding to the panels, not just living on top. I’m still hoping Berta comes to Craw County and gives Coach Boss what for, but it looks like that’ll have to wait a bit. Southern Bastards #6 is out November 19, and it looks like we’re going to see even more of Coach Boss’s past.