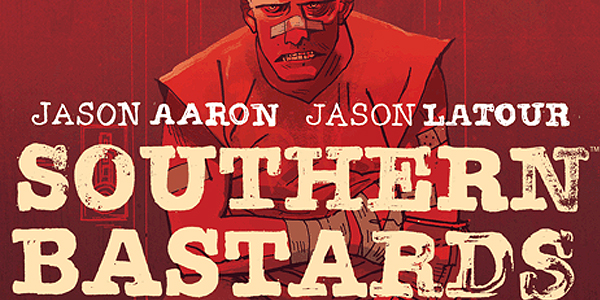 We’re traveling South for some more pigskin, punches, and pain with the latest from Southern Bastards.

Image Comics released Southern Bastards #6 back towards the beginning of December. The story is written by Jason Aaron with Jason Latour on art. This issue marks the midpoint of this look back at the early days of Craw County’s current head honcho, Euless Boss. Things weren’t always so good for Coach Boss, as we see from his constant beatings and badgerings.The man came up through some rough times, which only helped to make him tough as nails.

The Skinny
Like I said in the intro, Boss’ early days were far from pretty. The amount of puke, blood, and agony that Boss has to suffer through is really quite admirable. Then, when he goes home to escape it all, he’s met with a trailer filled with strangers and cocks (including the poultry kind). Thankfully for him, he befriends an old, blind guy called Ol’ Big who helps him to up his game, and maybe give him a shot at getting on the field. Well, until they came looking for those stolen roosters, but you’ll get to that.

The Good
Southern Bastards #6 continues to be a hard-nosed story about triumph over struggle. The characters in Craw County have experienced the kinds of conflicts that would make most men cower. Due to the underdog nature of Boss’ story, I felt myself forgetting what happened in Southern Bastards #4, and almost feel bad for this guy. I try and remember how much of an ass this guy turns out to be, but now it feels a little less his fault, I guess. Aaron continues to knock the art out of the park. The full colored dialogue panels combine with the monotone football, action shots to show the progression of Boss’ abilities very well. What results is a feeling of a montage, without all that crappy 80’s music. And again, they finish with a gut punch of a cliff hanger, forcing me to count the days until the next issue.

The Not-So Good
It was damn near impossible to find something about this issue that stuck out as a bad thing. It took a few read throughs as well as careful examination to find even one panel with an inconsistency. I was able to find one where the shiner on Boss’ face suddenly disappeared, but Latour could easily argue that the shading that is seen would cover the color. I’d like to think most fanboys don’t scour over their issues repeatedly, looking for errant strokes, but hey, someone has to do it right?

The Decision
There’s a reason why I picked this series as the best from 2014. Each issue has it’s own rise and fall, with each chapter hitting like a brick. Hard and powerful imagery atop a story that could tug on anyone’s heart strings. And like I said in my year in review, seeing all this backstory on Boss is going to make his encounter with Earl’s daughter harder to choose sides. Southern Bastards #7 isn’t out until January 28th, which allows you plenty of time to catch up if you’ve been sleeping on this southern fried violence.