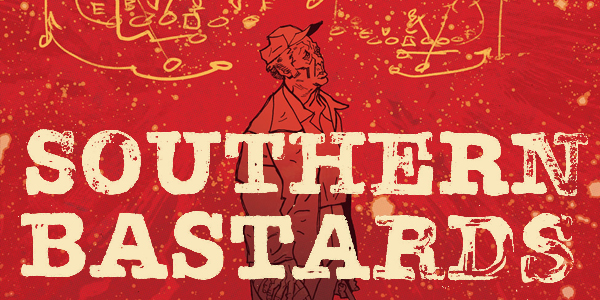 Euless Boss still has a way to go before he becomes the bastard we know, but things are starting to make sense.

Image Comics released Southern Bastards #7 back towards the beginning of February. The story is written by Jason Aaron with Jason Latour on art. We continue our look back at the early days of Ol’ Coach Boss, his less than ideal upbringing, and how he got to be so damn angry.

The Skinny
Poor Euless is confined to a pair of crutches following last issue’s fiasco. The perpetrator feels slightly guilty that he had to make an example out of Olis’ boy, and he tries to make amends, but it only ends up in the ashtray. Olis tries to come back home, but this time Euless is ready, will all the fear faded away. He uses this to bounce back and become the star of the Rebel’s defensive line, but will it be enough to get him a scholarship? If you’ve kept up to date with this story so far, you should know better than to keep your hopes up.

The Good
I’m still very impressed with how the Jasons are capable of making me feel sorry for the same guy that is the antagonist of the first arc. It may be because Euless is such an underdog compared to the revered Coach Boss he becomes that you can’t help but root for him. For example, I cheered when he drilled his father out the front door and finally stuck it to that sorry piece of crap. Oh man, and the sorrow I felt when all the fans leave was terrible. What made it worse was Latour’s art driving home the emotion with reds on a muted gray background. There are other examples of how well the art works for this story, but it’s best if you just read it yourself.

The Not-So Good
After watching how far timid little Euless has come, only to find out some bigoted fat-ass ruined his chance at a career, I find it very hard to believe that Euless would suck it up and go work for the same guy. Especially doing a job as trivial as the ball boy. The Jasons are going to need to close this arc with something really good to make the jump feel believable.

The Decision
Despite my feelings towards the ending, I’m still in love with this series. The story telling has a grit to it that appeals to my inner violent self. The art carries this emotion from cover to cover ensuring that each panel strikes with severity. I’m looking forward to seeing how this arc wraps up, and to see if we finally get back to the present. Despite how I might feel now, Coach Boss is still deserved some raw justice, and hopefully it’ll be Earl’s daughter that dishes it out.