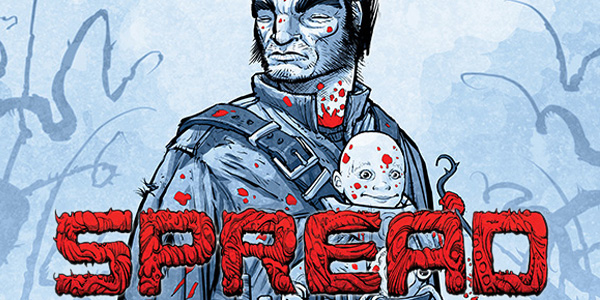 Image Comics’ new horror series Spread explores how tough it is to be a single dad in a world inhabited by toothy & tentacle-covered monsters.

Image Comics releases their newest horror story this week, called Spread.  Written by Justin Jordan with art by Kyle Strahm, Spread is a horror fan’s wet dream. The creators set the tone from the onset of the story, showing the aftermath of a battle between some people on a jet versus a toothy & tentacle-covered monster. Spoiler alert, the monster, better known as the spread, kills em all.

We then meet one of our two protagonists, No, a bad ass dude in a US Army coat that must go to the same barber as James Howlett. He happens onto the scene, to survey the damage, and we learn that he currently resides in a quarantine zone, amongst the spread. The devastation that Strahm depicts, with beautiful color work by Felipe Sobreiro, isn’t caused by the spread alone– turns out there are bandits that roam the area that are just as dangerous as the monster. Six pages in and No already has to give his trusty hatchet a workout. The scenes showing the spread’s abilities were nuts! Teeth for corneas and snakes for eyeballs!!  This book is as twisted as it is gory, which all contrast so elegantly against the pristine, snow covered backgrounds.

Next we happen upon the second half of our protagonist team. We see a woman carrying a bundled package through the tundra. She’s sporting a hot new look of a bloody arrow through her knee cap, and happens to be followed by a small group of bandits that are interested in her package. After an altercation, the reader better understands why the guy on the cover looks like a mix between Mad Max and Alan from the first Hangover movie. The package contains a baby, who also is the narrator of the story. The bandits take off with the baby, with plans of turning her into food, leaving the woman dying in the snow. She manages to hold on long enough to let No find her, and to put him on a quest.

No ends up catching up with the bandits by the middle of the issue. What I really like about this story is how Jordan and Strahm pace the action scenes out, letting suspense build without needlessly filling panels with dialogue. No is a pretty quiet guy, and it’s really only when he’s kicking ass does he talk. He makes short work of the bandit squad, and retrieves his new friend, a baby called Hope. Yep, that’s right. His name is NO and her name is HOPE. A little foreshadowing?

The book ends with No and Hope fleeing from these creatures called runners. They are red like the spread and run like tentacle covered greyhounds. The spread manages to surround No and Hope and it looks like this book is going to have a very short run, until Hope shows us why she might be the only hope.

I thoroughly enjoyed the first issue of Spread. The book is bloody and gruesome but has a feel-good team at the core. I also really liked how Jordan and Strahm weren’t afraid of using full page illustrations. It helps to build the understanding of how lethal the spread can be, and how massive it really is. Some of the issue is a little contrived– No just happens to find this woman moments before her death– however the rest of the nightmare inducing material more than makes up for some small gripes with the storyline. Overall Spread will offer you material to fill your worst dreams, and is a very entertaining read for horror fans.