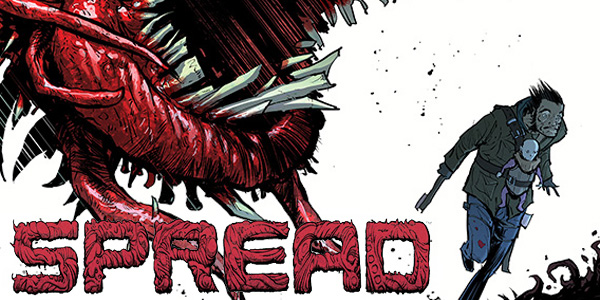 Spread #2 offers gore, guts, newborns and nipples in their continuing story of two survivors in an infected world.

After recuperating from spending an awesome weekend at the Boston Comic Con, I had the chance to sit down and read through Spread #2, which was released by Image Comics last week. The story is written by Justin Jordan, the art by Kyle Strahm, and the colors are by Felipe Sobreiro. For those of you who missed the first issue, Spread is a horror story about an alien infestation on planet Earth that has wreaked havoc and has completely altered the way of life for those left among the living.

The story picks up with a Fabio looking fellow named Ravello, being pampered and cleansed by a team of topless women. After he’s sufficiently beautiful we walks out and greets his people. Turns out he’s in charge of the bandits we saw in the first issue. Ravello informs the readers that for 10 years they’ve been alone, but recently this has changed (as recent as the previous issue…) Ravello singles out one of his flock, a sheepish ravager named Dickie. Dickie claims to have fought his way back to camp after meeting our hero, No, in the previous story. Ravello easily deduces that Dickie cowardly ran from the fight, and decides to make an example out of him by snapping his arm. It feels like Jordan is trying to make it clear that Ravello is not a guy to be messed with.

From here we catch back up with No and our narrator, little baby Hope. They have been walking a while, and Hope has been crying a chorus for some time. While he’s paying attention to her, No doesn’t notice the slave cart that has pulled up behind him. At first you think it’s going to be a good time for No to start axing questions, but instead the slavers ask if No is interested in their wares. In the cell of the cart stands a very strange, blond woman with an exposed breast (not really the best clothing choice given the current arctic climate). No thinks for a moment, tries a sample of the woman’s milk, and then offers it to a very hungry Hope.

Then there’s Mr. Creepy. He stands lanky and tall with a jagged tooth smile that runs from ear to ear. He wears a suit that looks as wretched as his face, as is watching the interaction from the forest while No deals with the slavers. Then Mr. Creepy touches the snow covered ground, and through his hand-print come tentacles that begin to grow.

Night falls and it appears No didn’t take the slavers up on their offer. The two men have set up a fire outside their wagon and are talking about the wild woman they have in their possession. No has wandered off slightly, but is clearly still interested in freeing the woman. He sets up Hope at a safe distance, and prepares to head back to the slavers camp to off the two wicked men. By the time he gets there, however, all hell has broken loose. An enormous spread worm attacks the slaver’s camp and makes a quick meal of the first man. The second tries getting away, but No takes a quick swipe of his axe, and the slaver is left a little light headed (so light it’s like it’s not even there).

What follows is a series of very cool action shots. No goes knuckle to tentacle against the giant worm beast, and has to dodge the toothy daggers a few times before freeing the woman from her mobile cell. The pair begin fleeing the monster, and are able to grab baby Hope mid sprint. No and Hope break away for a second, and No uses a bit of Hope’s spit on his axe to make it super effective. The woman makes off with Hope while No’s left to fight the giant worm thing, that now is growing mouths all over its body. Sure enough, the worm is no match for No and his hyper powered axe. Once vanquished No goes off to find Hope, who is enjoying a meal from Crazy Molly’s jagged jugs. Oh, and with the close of the book, we learn that Molly is Hope’s mother.

Spread #2 had a lot of elements that are working for it, and some that aren’t working so well. The monster that Jordan has developed is horrifying, and with the way Strahm draws it, it’s chilling to lay eyes on. Some of the story plot points seem overly convenient. I’m not asking for Shakespearean plot developments, but I’d prefer introducing Molly in a way that isn’t so coincidental and easy. On the other hand, I like that Jordan addresses the similarity between the baby narrative of Saga and Spread in his letter at the back of the book. It is an unfortunate coincidence, that I feel works for both stories in their own way. But to be honest, what is really keeping me coming back to this story is the way Jordan and Sobreiro are jiving so well. The malevolent landscape they have created is visually stunning and provides a lot of action and suspense within the panels. I especially liked some of the panels showing the attack of the Spread worm, and how they weren’t afraid to go big with the art to show the sheer size of the beast. Those full bleed pages always hit me hardest.

So, if you love gore and guts, newborns and nipples, then go to your local comic shop and grab an issue of Spread #2 today.