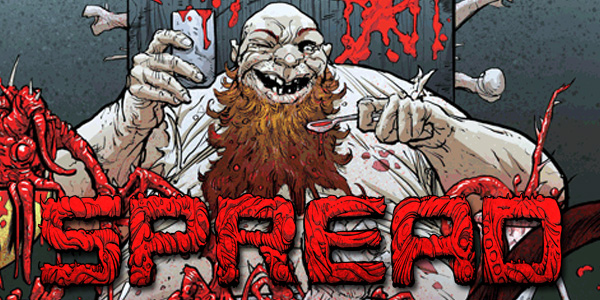 Severed limbs and infectious tentacles are the soup du jour in the newest issue of Spread from Image Comics.

Out today from Image Comics is Spread #3, written by Justin Jordan, with art by Kyle Strahm and colors by Felipe Sobreiro. Spread is a horror/suspense story set on Earth after an alien infestation has decimated a large portion of the human population. Life as we know it is long gone, replaced by alien tentacle monsters, cannibalism and the threat of death around every corner.

We meet back up with Spread’s protagonists at the start of issue three. The nomad warrior No, the crazy lady with the dreadlocks named Molly and the baby/narrator Hope. The three have been wandering for a while and decide it’s time to resupply, so to do this, they must venture into civilization. As Hope puts it, people are social animals, so even after all the change that has been brought to the world, they still tend to flock together. Civilization these days isn’t like your typical city. The three stand before what looks to be a walled fortress and are forced to check their weapons upon entering. I enjoyed the panels showing No disarming, as they built across the page to show off his full arsenal, fork included.

Once past security we see that this mighty fortress is little more than a shanty town erected out of scrap and plywood. It is inhabited by a couple hundred miscreants dispersed throughout the camp. Nomads from all over can come here to restock on all their needs. Weird rat on a stick, a scarf or a venereal disease, it’s all there for sale at Jack’s. While No, Hope and Molly peruse the wares, we also get a glimpse of Mr. Creepy. He’s currently preaching to a growing crowd, but is disrupted when one of the audience hurls a rock at his head. This doesn’t sit too well with another audience member, who begins picking a fight with the rock thrower. One things leads to another, the fight swells into a full blown riot. Thankfully Jack, who is a refrigerator-sized ginger with a big red beard, is quick to the scene. He doesn’t take long to find the instigators and dish out a little skull cracking justice. No’s gang manages to dodge the scrap, and makes way towards the bath houses to get the smell of a goat dipped in crap off of them.

It’s interesting the way Jordan writes the next bit, having us join in on three different people who all happen to be bathing. We see No and Hope having a splash, Molly and her tangles cleaning up and then the guy that threw the rock at Mr. Creepy. Nothing really interesting happens during No, Hope or Molly’s time cleaning up, except that Molly decides to shave her head to look like Hope. However, the instigator is joined by a female companion of Mr. Creepy, granted he doesn’t know that. She slinks towards the man’s tub, and slips off her bathrobe exposing a very attractive body underneath. As she approaches, the man perks up and begins to engage. However, something is clearly not right when the guy’s hand sinks into the woman’s breast, exposing her for what she really is. She launches a series of Spread tentacles that turns the bath into man-chum stew.

While this guy is feeling what it’s like to mate with a preying mantis, No, Hope and Molly are in the restaurant staring at a couple bowls of chili. Something isn’t right about it though, and No tells them not to eat it. No leaves the girls at the table and sneaks back to the kitchen to get a better look at the ingredients. As No puts it, the chili didn’t cover up the smell of its ingredients well enough. What smell? The smell of human meat. What No sees next is brutal. Strahm illustrates a scene of culinary horror, displaying a few bodies on meat hooks at varying degrees of decay. Unfortunately for No, that’s not all that’s in there. Jack sneaks up behind him, but he’s not quick enough for No. No turns and attacks Jack with a series of punches that prove to have little effect on the sheer girth of Jack. Jack retaliates by throwing No across the room, knocking him out. When No comes to, he’s hanging out on a meat hook and getting his ears talked off by Jack. Jack noticed he wasn’t alone, and decides he has to do something about Molly and Hope as well. Before he can make his next move though, Jack is interrupted by one of his crew. Ravello, the Fabio looking leader of the Bandits (from the last issue) just showed with his army, and they look hungry for blood.

Spread #3 continues to be an infectious story through and through. Jordan keeps his readers entertained by mixing in some small sight gags to balance out all the gore and violence that this series has to offer. These break up the story and offer a nice resting place before coming back to the carnage. Strahm’s characters have this air about them, giving you the feeling that everyone in this world is some degree of deranged. Sobreiro is also doing fantastic work, bringing all the splatter of slaughter to life in vivid colors that contrast against the simplified backgrounds. I can’t wait to get my hands on the next issue, but it looks like we’ll have to wait over a month. Spread #4 is due out October 15th.