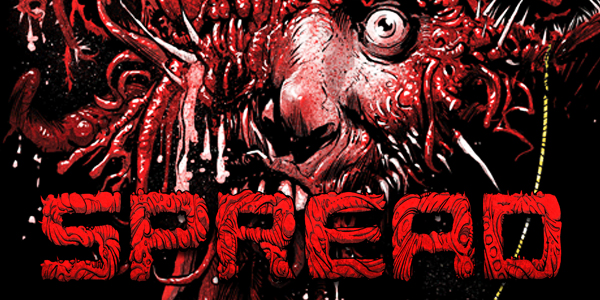 Molly, No and Hope fight for their lives as the alien influence keeps Spreading.

Image Comics released Spread #4 at the beginning of November. The series is written by Justin Jordan, with art by Kyle Strahm and colors by Felipe Sobreiro. Spread is a horror/suspense story set on an alienated Earth, which is half decimated due to an infestation of these horrible tentacle monsters. The series focuses on three characters. Hope, the bald, baby narrator. No, her brutish savior who is deadly with a blade. And Molly, the crazy lady with the matching bald head that may or may not be Hope’s mother. The story opens on Molly and a look back to the days when she wasn’t crazy, and how she met Ravello.

However we stay there but a page before jumping right back to the present where Ravello and his Raiders are in town to mess stuff up. The sight of Ravello worries Molly, and leads me to speculate that we’re looking at Hope’s father, but I have no actual evidence of this. Jack confronts Ravello about why he’s in town, and the reader gets a chance to remember No messing up Ravello’s crew back in the first issue. While this is happening, Molly tries to sneak away, but is spotted by the creepy purple guy. He sends one of his minions to pursue, but Molly gets the drop on him. Literally, like off the top of a big rig trailer, and rips into this dude’s neck with her teeth.

We meet back up with Jack who is leading Ravello down to No’s holding cell. No caught Jack making meals out of patrons, and was locked up because of it in the last issue. However, when Ravello sends one of his men to retrieve No, all he finds is a knife to his forehead. We get a pretty cool spread of No slicing and dicing his way through the bad guys, and he even manages to give a good body check to the fat gut of Jack. Then he gets to square off with Ravello, sword versus knife. No gets him to cut through his handcuffs, allowing full motion. The two trade blows until eventually Ravello gets all Indiana Jones and pulls out a revolver. No has no choice but to surrender.

Back with Molly and Hope, they are looking proudly over the remnants of the man that tried to attack them. The sound of someone approaching scares them, and they dive into the snow to hide under a trailer. The stranger comes upon the battered body of the man Molly messed up, and starts checking him for personal effects. Poor decision. Turns out this is no ordinary dude, it’s one of those weird alien things. The corpse reanimates and rips into the strangers flesh with sharp dagger jaws. Then the monster changes form into a spider type crawler and begins to chase Molly and Hope. Just when it looks like he has them cornered, we turn the page.

Back to No, Ravello, and Jack who are preparing for No’s execution. Before No gets a katana to his throat, Ravello would like to know where baby Hope is. Surprise surprise, No doesn’t say a word. Instead the Preacher pipes up, you know, the weird purple guy. He goes on a rant about god and heaven, but eventually it’s clear he really just wants baby Hope as well. Jack tries to throw him out, but no sweat. Purple preacher brought back up. Out jumps a team of six normal looking folk, well normal until the thorny tentacles erupt from their body and faces. Once in their “battle armor”, they start ruining everybody’s good time. In the midst of all the fighting, noone is watching No. He sneaks away and starts working at his handcuffs. The last page was a nice contrst, and a good way to cliff hang. We see a Spread hand reaching towards a nameless victim, then Molly and Hope about to be devoured by their attacker. But we’re left with No snapping the chain on his handcuffs. My guess? Next issue is gunna get bloody.

I really have been enjoying my time with the Spread series. The weird infection paired with the post apocalyptic landscape intrigues me, and sets the stage for a twisted and dark story with a high body count. Jordan is spending some time familiarizing the readers with the story’s main characters, allowing Strahm and Sobreiro to illustrate these characters across multiple panels. This gives the readers a full bodied look into the people, allowing us to feel that much more familiar with them. I’m into the weirdness, and I’m into not knowing where this story is going. Next issue is out December 10 and promises a look at Ravello versus No mono-a-mono. I can’t wait.