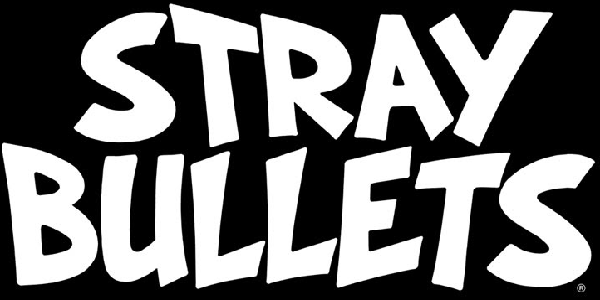 David Lapham’s Stray Bullets is back, thanks to Image Comics!

David Lapham’s Stray Bullets: Innocence of Nihilism compiles #1-#7 of the Stray Bullets series originally published by El Capitan in 1995. It’s a multifaceted story set in realistic settings focusing on the absolute worst people and situations that twentieth-century America has to offer. It’s depressing, yet at the same time crushingly real in it’s execution. David Lapham both writes and illustrates the series, so the original intent of the work is sustained throughout the entire volume. If you’re looking for happy endings, clever narration, and an overall well balanced story you might be better suited to looking elsewhere because Stray Bullets doesn’t have any of that. It’s just real. 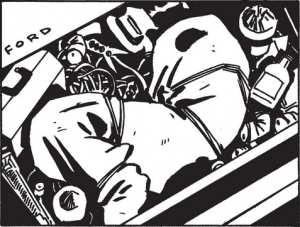 It operates on a seemingly random set of rules that exploits all the horrible stories about people growing up in America from the 1970’s to 1990’s. It doesn’t tell a “story” in such a classic sense of the word. Instead it reveals a life in progress with no need for tools like foreshadowing, irony, or illusion to segue in to the exposition. The frightening truth about Stray Bullets is that it doesn’t need to build a narration because it’s just so relatable that there’s no use in wasting time on exposition. It’s sex, drugs, murder, violence, and alcohol. It’s how people make the same mistakes over and over again, and how they continue to pay for it. It’s the domino effect. Life begets life, and the quality of that life is determined by the people who live it and are influenced by it. David Lapham’s stories are Sin City noir without the science fiction. His characters seem like caricatures of all the monsters that we live among every day, but are in truth incredibly well fleshed out on the psychological level.  There’s no evil, it’s just people. 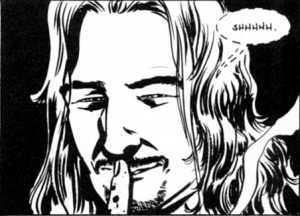 Have you ever just looked at someone and known that they were…off in some way? The art perfectly captures everything that makes a person a person, including all the features in a person’s face or expression that hints at how world weary they have become; and accentuating on these features puts us right in the front seat with them. The story not only reveals what they do when they go out in the night to prey, but what they do when they go home. It’s a personal character study of the predator, and what has to happen to a person to make them a predator. It’s an unflinching look at the psyche of the amoral or corrupted, that’s just as relevant today as it was back then.

Stray Bullets: Innocence of Nihilism is hard to review because it isn’t a story in the strictest sense. It’s life. Sure the drama is turned up the eleven, and Murphy’s Law seems to be the only one that matters, but it’s so close to the sadness of real life that it’s hard to think of it as a story. Everything is presented so naturally, with every little idiosyncratic part of the world and it’s characters being represented, strengthening the realistic atmosphere. The scenes, especially involving “parties”, can sometimes get a little too busy and hard to follow, but most of those moments are from perspectives fueled by drugs or alcohol, so it seems somehow appropriate. There are also some conversations that are so desperately Quentin Tarantino that it’s hard to take them seriously.

All in all though, Stray Bullets: Innocence of Nihilism is a painful reminder of the horrors or reality. It’s an ideal comic to read if you like stories with nihilistic themes, but if you refer to unhappy endings as “depressing” you might want to steer clear of this one.