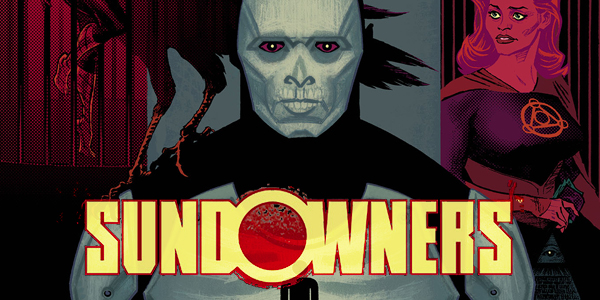 When your addiction is crime fighting, what’s really the cost of one more time?

Sundowners #1 is a new series written by Tim Seeley with art by Jim Terry and colors by Sean Dove. The story is published by Dark Horse Comics and takes a look at life after the cape, but from the standpoint of crimefighting being more of an addiction than a life choice. When the Sundowners go out after the sun goes down, the people they were are hidden behind a mask and they only respond to their night names. Although these heroes are looking for a way out, something sinister keeps pulling them back in.

The series opens with a look at a female hero called Pigeon. She stands noble on a rooftop while contemplating the change she’s made to the world. She speaks of the how much she enjoyed adorning the costume and being a sexy symbol of justice, but the time has come to give it all up. She wants to be a part of something bigger, so she removes all of her clothes and walks into this creepy pool so that two hooded women can pour water over the lesions on her back. Weird start to a book, but I’m into it.

From here we play guest to a meet up between Dr. Jen Brunner and Dr. David “Shreds” Shrejic in a bar type atmosphere. David insists that he’s more of a listener than a talker, the spends most of the time they have together talking poor Dr. Brunner’s ear off. David seems unaware of the contradiction, and continues talking. He tells Dr. Brunner about how he has started conducting support groups for an assortment of conditions, and while he was doing this, he believes to have found a new disorder. Dr. Brunner suggests that regardless of the good he thinks he’s doing, it would appear that David is setting himself up for a situation he can’t handle. Clearly David is either bad at keeping time or doesn’t like her opinions on the matter, but either way he abruptly ends their meeting and sticks his sister-in-law, Dr. Brunner, with the check.

We travel across town to the Chicago Mental Health Center where at 10 pm in 13F is the Sundowners Support Group hosted by David “Shreds” Shrejic meets. The meetings attendants file in, grab a coffee or a donut and take their seats. After a while, David starts by reminding everyone that they aren’t the only ones suffering from Sundowners Syndrome. After his intro, he opens the floor for people to start sharing, and invites Crowlita to be the first. She tells the group about how she went to a party with her co-worker Meghan after working as a go-go dancer last Saturday. The party was lame so Crowlita goes to try and find her friend Meghan, which she does, behind a closed door. What she found on the inside was mind boggling. The room was filled with a lot more people than she initially thought and one guy was able to show off his skull through his head. This freaks Crowlita out and causes her to run away. Strangest thing is, next day at work no one at remembered Meghan. It’s like she was collectively forgotten.

Next we meet The Concerned Citizen, better known as Citizen. He is a large man in a plain white mask with the symbol for a male restroom door on his chest. He tells the group how he was doing his route last Wednesday and witnesses a dude right after a drug drop. The kid tries to escape, but no luck. Then in a last ditch effort, pulls a knife on Citizen, which proves to be a moot action. With a solid right to the Perp’s nose, Citizen is able to quell the conflict. Citizen drags him to the top of an apartment building, and when the kid comes to, he’s being dangled by his leg off of a roof. Citizen is demanding answers but the kid doesn’t talk. Then, all of a sudden, Citizen’s arm goes numb and his fingers slip. The kid falls, but when Citizen is able to check the scene later, there are no signs of splattering. It’s as if someone saved him before he fell. Also, Citizen is left questioning his own strength. He’s certain he had enough strength to keep that kid held for a while, and speculates that his loss of grip could be induced somehow.

Next we meet Arcanika, who is a kleptomaniac on top of being a superhero. She is telling a story of how she was out trying to find something for her sister’s baby when her attention is pulled towards the sounds of screaming. She’s first on the scene after a truck driver had a heart attack and crashed his 18-wheeler into another car. However, try as she might, she isn’t strong enough to pull a pinned girl from the wreckage. Arcanika’s powers, or curse depending how you look at it, works as a balancing act. She’s able to exchange bad deeds for the power of God’s chosen few, but apparently she wasn’t bad enough before being tested. She was told by paramedics that if the girl was saved just a few minutes earlier, her chances of survival would have been better. This clearly doesn’t sit well.

Lastly, we meet the oldest member of the group, Karl, also known as The Patient Wolf. The Patient Wolf tells a story about how he was running from a cop back in his younger days of the 1960s. The cop he is running from seems none too happy on account of being poked in the eye. Seeing how Karl is being chased by him, he surmises that it must have been him who had done the poking. The pair make it to a church, where The Patient Wolf attempts to seek refuge. Once inside, the cop’s eye begins acting strangely. A pustule grows from his socket and eventually erupts into a strange cloud of colorful smoke. The recollection of this tale sends Karl off the deep end, causing his post-stroke mind to lose it’s vocabulary and resort to unintelligible mumbles.

The meeting breaks after this, and the four begin going their separate ways. Arcanika offers to give Citizen a ride, to which he agrees and Karl is seen walking by himself, followed at a distance by the curious Crowlita. In an instant they all hear screaming. Around the corner where Karl just went, we can see the guy that Citizen dangled over the roof trying to pull him into a van while another guy in a suit watches and makes animal sound effects. Crowlita jumps on the guy in the suit, but is ambushed by the same shadow skull people she saw at the party in her story. Citizen and Arcanika show up but prove to be little help. Both are seen trying to help but struggling a lot. Then the panels go blank, and the crew is seen coming-to on the ground after the scrap. The van is gone, and so is Karl. We also learn some other stuff, like Citizen is really a large black man, and apparently Crowlita is really a giant bird lady?

Sundowners #1 is an interesting take on life after the cape. Seeley’s concept of heroism as a condition is very intriguing. Part of me wishes that by the time this series ends, we really learn these people were patients at a mental hospital the entire time. Terry and Dove seem to work very well together, collaborating on creating a dimly lit story that is dressed in muted tones. The characters seem fairly unique, which is hard to do when dealing with superheroes. Ultimately, it seems like this is going to be a slowly assembled mystery story with overlapping parts, and I’m interested to see what’s really going down.