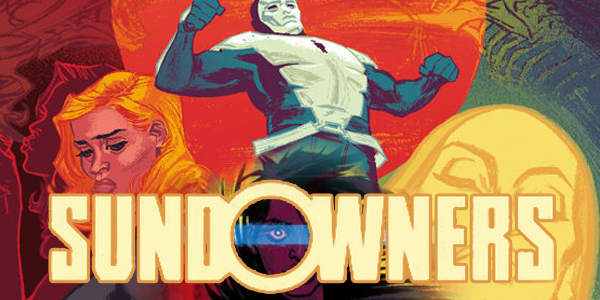 These heroes are addicts. Crime is their passion but is sanity their cure?

Dark Horse released Sundowners #2 at the end of September, the on going look at the mental state of costumed heroes. The series is written by Tim Seeley with art by Jim Terry and colors by Sean Dove. At the end of the previous issue, our heroes were attacked outside of their Sundowners Support Group, a once a week meeting for people with delusions of super heroism. However, it all feels very real to the members of the group, and we pick up with them moments after the bad guys have gotten away with their friend Karl, who also goes by the name The Patient Wolf.

We relive the last few moments of the previous issue through the eyes of Mr. Outsider, a part Deadpool, part Batman type character. He enters the scene by jumping down from the roof just as Crowlita, Citizen and Arcanika are waking up after the scrap. We learn a bit about the characters in a very brief stint of squabbling. Citizen accuses Crowlita of hiding her true face, the crow’s head that brought the last issue to a close, while she comments back about how Citizen is a black guy in white face. Clearly the group’s dynamic is flawed, and they continue to devolve as they are joined by Mr. Outsider. The group talk strategy, and surprisingly, Mr. Outsider doesn’t work well with others. He volunteers to track down Karl while the other three go find the Dr. Shrejic. Without much deliberation, Mr. O disappears into a bush and the other three figure out how to find their mentor. Luckily for them, the ever sinning Arcanika stole his wallet to help her abilities.

We jump cut to the bar where the Doc is suddenly realizing he’s without a wallet. Soon after noticing he’s a bit short on cash, he gets interrupted by a bouncer looking dude, who informs the good doctor that he has some freaky looking visitors waiting out front for him. The Sundowners are happy to see Dr. Shrejic, however the feeling isn’t mutual. The three tell him of Karl’s abduction, but they end up sounding more crazy that convincing. Dr. Shrejic doesn’t let them get very far into their story before he tells them all to go home. He goes on to explain that Karl get’s picked up every week by a handicapped service, so clearly they all must have misunderstood what they saw. This doesn’t sit well with the Sundowners. Crowlita let’s her bird fly and storms off in a huff leaving Citizen and Arcanika to ponder their next move. Citizen is ready to start hitting up his own contacts while Arcanika stops to wonder if they actually are crazy.

After this we find Crowlita back at the nudey bar she works at. She’s reminiscing about the first time she met Karl when she’s joined by Meghan, her friend from the party in the last issue. Meghan used to work with them at the strip club, but no one else around Crowlita can seem to remember. Oh, and she can flash her skull in this weird red light effect, nobody can see that either. Meghan talks some weird stuff, but it’s enough to pique Crowlita’s interest. She lets Meghan walk a bit and then follows her out of the bar.

Next we see Citizen checking in with his source, Graham Cherry of WCHI Radio, an NPR type station that serves the community. Citizen catches him on a cigarette break, but Graham won’t speak to him until he takes off the mask. So Citizen obliges, becoming regular Joe, then spills his guts on what went down. Graham is less than impressed however. He makes it sound like this is one of many alerts from Citizen, which further pushes the idea that these heroes could be making the whole thing up. It becomes more suprising the Graham that Joe is being treated by Dr. Shrejic. We don’t learn what he did, but it sounds like it was so bad that it’s surprising anyone gave him a job.

Next we end up in a stranger’s apartment as Arcanika is trying to power up by having some homosexual intercourse. However her would be partner is not interested in just a booty call. Dejected and embarrassed, Arcanika leaves in a hurry. She is looking for a quick boost on her sin-o-meter, so she gets the idea to approach a helpless homeless man and puncherize his face. From any outsider’s perspective, these are clearly not the actions of a sane person. Before we can leave this storyline, we’re introduced to a hunky guy dressed all in black. Seely alludes to the idea that he may possess powers opposite to Arcanika, and could possibly be her foil.

The issue ends with Karl being dragged to an ominous looking church. He is forcefully escorted by the two burly men who kidnapped him, and they carry him to a back staircase and down to a red pool in the basement. While this is going on, we see Mr. Outsider has done as he promised, and is currently swimming through the sewers trying to find his way into the church. Stealth is not on his side though, and he’s quickly surrounded by small piranha looking creatures that sink their teeth into the flesh underneath Mr. O’s costume. With this gruesome scene we see that the narrative notes in this issue did not come from Dr. Shrejic like in the previous issue, but instead the Illuminatrix, a fair skinned woman dressed in white. We see her emerge from the pool just after Mr. O is presumed disintegrated. She offers Karl to join her, for he is special and together they will be jubilant.

I’m thoroughly enjoying the Sundowners series. Often I’ve looked at the costumed heroes that adorn the pages of the big two’s books and thought to myself, in the real world, would the sight of spandex really be that impressive, or would these people appear as silly as a cosplayer out of their convention context? Seely has taken this idea and ran with it, delicately leading his readers on an inquisitive path, letting us decide for ourselves if these people are insane. With this concept, I can’t help but wonder how much of Terry’s awesome art is really just a figment of the Sundowner’s imagination. I’m intrigued to see how far they can take this story, and will definitely be reading Sundowner’s #3 out October 29.