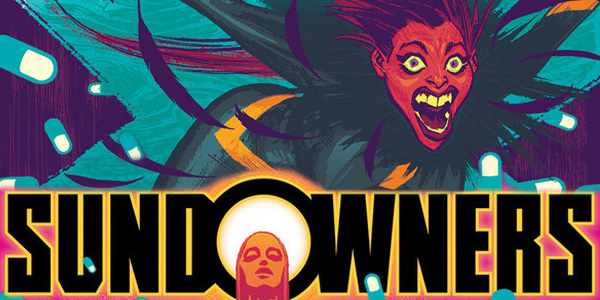 Sundowners #3 is back to make you question all you know about superheroes. Was Superman really just an insane reporter with delusions of grandeur?

Released back at the end of October, Dark Horse brings us Sundowners #3, a continuation in the look at superheroism as a mental disorder. The series is written by Tim Seeley with art by Jim Terry and colors by Sean Dove. The series follows a group of would be heroes, all with their various ticks or conditions. We left the Sundowners Support group in a rough state, especially one member in particular, Karl Volf, the eldest member, who also goes by the name The Patient Wolf. After being kidnapped in front of his friends, we last saw him being dragged into a pool by some scary looking chick while being asked to join them. It was very strange.

The issue starts with a phone ringing in Karl’s apartment, but no one there to answer it. On the other end is the leader of the support group, Dr. David “Shreds” Shrejic who is quick to disregard Karl’s lack of answering. He’s in the company of an unclothed temptress, who lures away from the phone and back to bed before Karl can be found.

Next we see Crowlita, a bitter hero with crow like abilities. She is following a girl she used to work with, but who no one but her seems to remember. She tails her a while, but before she can follow her into the church, she’s struck with one hell of a panic attack. Terry draws a frightening scene of mountains and blood red lightning surrounding Crowlita as a horde of little sperm monsters close in from all sides. They pin her down, and begin crawling into her mouth, but somehow she’s able to get away, and goes sprinting down the street.

We are then brought to a residence on Lincoln Street where a short haired black woman is being awoken by the sound of an intruder. She grabs her snub nosed revolver and begins creeping through the house, but she soon finds her trespasser. Standing in front of her is Joe, the Concerned Citizen, a vigilante superhero who wears the male bathroom symbol on his chest. He also happens to be her ex-husband. Sherri, the owner of the house, is also not very eager to see him. Joe pleads with her, explaining the awful day he’s had, but she refuses to get pulled back into his madness. She declines his attempt at staying over for the night, due to her receiving an expected visitor. As she walks Joe out the front door, a police cruiser pulls up. The officer and Joe exchange a few words, but it’s clear the officer isn’t here on police business. Looks like Sherri has a sweet spot for purveyors of justice, just not the costumed type. We leave a teary eyed Joe, as he puts his mask back on and returns into the night.

Next we rejoin the devious Arcanika who has just pulled the car into her garage. As she gets out, she is ambushed by a familiar face. She calls him Brandon, and he KRAKs her one across the jaw, leaving her unconscious on the floor.

We then find Karl who is waking up next to a frisky redhead in a candle lit, cement room. The girl comes on a bit strong, causing Karl to get startled and spring out of bed. He says little, which allows the redhead to do all the talking. She continues to pursue him, telling him that she is his to do whatever he wants, a gift from the enlightened. The voice follows him, even after he breaks from the room and into darkness. We see four varied expressions shuffle across his face as he contemplates the glowing voice’s questions. Isn’t he lonely, didn’t he like waking up next to someone? When he’s finally able to muster out a one word answer of yes, the room erupts with light, and he sees that he is far from alone. Hovering in front of him is a woman in all white who calls herself the Illuminatrix, and she has just given him the gift of his voice back. Now it’s time to share with her, and the crowd that is gathered in the pews.

We find ourselves back at Arcanika’s house, but it’s daytime now. Slowly she awakens to realize she’s be bound and gagged to her own bed with thick rope. Brandon, who apparently is Arcanika’s obsessive ex boyfriend, has been looking for her since she left him in a bloody mess. He starts talking cryptically, either quoting the bible or sounding convincingly close, while picking up a knife. He’s distracted by the sound of the garage door opening, as Joe, the Concerned Citizen lets himself in. Apparently, he bugged Arcanika’s car, and is surprised to find blood on the ground next to it.

In full gear, Citizen enters the house, trying not to give away his presence. Too late however, as Brandon has already gotten the drop on him. Brandon lunges, knife first, and catches Citizen on the arm. The two trade blows, wrestling to get on top of the pile. Just when things start looking hopeful, and Citizen is able to get a solid headbutt in, the gesture proves ineffective, and is reciprocated with a face full of wall. The impact cracks Joe’s mask, exposing the lower half of his face. This allows Brandon the perfect opportunity to plant a kiss on Joe’s lips right before slamming the knife through his open palm and into the floor. We leave this scene with a look at Arcanika who appears to be slowly loosening her restraints.

We’re close to the end now, picking back up with Dr. Shrejic who is grabbing his morning coffee just as Joe’s buddy from radio station, in the last issue, starts to ask questions. Apparently Shreds was involved in a trial with less than ideal results. The reporter continues his line of questioning, bringing up two names, one called Chloe and the other who was Shred’s wife. Dr. Shrejic doesn’t say a word. He just gets into his car and let’s his driver whisk him away from this bad situation. However an incoming call from his credit card company brings more bad news. Apparently there was almost $300 charged to his card at a late night pharmacy. We see the culprit on the last page as we leave Crowlita surrounded by pills and empty whisky bottles while she lays fairly lifeless on her bathroom floor. Is this the end for our feathered hero?

Sundowners #3 is another issue chock full of “what the what!” moments that seem to make little sense at the time. I can’t help but suspect that as the story progresses, we will question less over what is real life, and what is just fantasy. Terry and Dove are really doing this strange tale justice, pairing weird angles and an array of panel layouts to the odd progression to the story line. When they need it to be, the art amplifies the suspense, resulting in really compelling panels that suck you in. Sundowners #4 is out right before Thanksgiving, and promises to shed some more light on the guy kicking the snot out of the Sundowners Support Group.