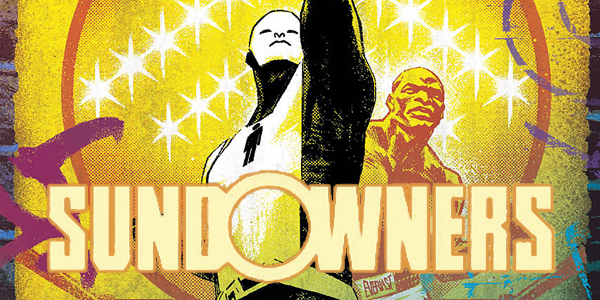 There’ s no love lost as the Sundowners Support Group fight for their lives against some very different demons.

Dark Horse released Sundowners #4 back in November, which is the continuation to the story of a team of superheroes that may or may not be just a bunch of crazy people. Sundowners is written by Tim Seeley with art by Jim Terry and colors by Sean Dove. In the last issue, we left two of the Sundowners Support Group amidst a heated battle with a past lover.

Arcanika and her exboyfriend Brandon are on either side of a divine wager. In an very interesting counterbalance, Arcanika gains powers by sinning, but ultimately is a good person, whereas Brandon is inherently evil, and gains powers by doing nice things and showing love. Unfortunately, Joe, better known as Concerned Citizen is just a dude in a mask, who happens to be getting his ass kicked by Brandon at the start of the issue. He’s able to turn the tides quickly, as the two continue to square off over the next three pages. I dug the battle panels, and thought that Citizen looked pretty cool with the shattered mask. They both seem to get the upper hand, but the scene culminates with Citizen delivering a haymaker, rendering Brandon unconscious. Unhindered by combat, Joe is able to get to Aranicka, and cut the ropes that hold her to the bed. Then, Joe promptly passes out.

We then catch up with Dr. “Shreds” Shrejic, the leader of the Sundowners Support Group, who has just managed to get to the apartment of Crowlita. Last issue, she boosted his credit cards, and went on a spending spree at her local pharmacy to help rid herself of her anxiety demons. When he finds her, she’s out like a light. In a panic stricken moment, we can see Shred’s leadership qualities shining through, when he’s able to organize some miscreants out front of the building to help him get Crowlita into his car.

Jump back to Arcanika who is tending to the unconscious Citizen. We learn quickly that Brandon is still a threat, and it would appear that it’s now up to Arcanika. Eventually the two face off, and we get a little insight on their past, and how far they’ve come. The dialogue soon ends and the battle starts. To boost her abilities, Arcanika starts sinnin like son of a gun. But just when she’s about to go all crazy go nuts, we jump to the church where Karl, The Patient Wolf, is being held against his will. Karl has been hanging with a glowy woman who goes by the Illuminatrix since the second issue. They kidnapped him in the first issue, and have been trying to convince him to join their cult. He agreed to join them, in exchange for his voice back, but is being too recluse for the likes of some of the cult members. Cut back in with Arcanika, who has turned Brandon into her own version of Arseface by pummeling the hell out of his mouth. The Concerned Citizen thinks they should take him to a hospital. Back with the Illuminatrix and Karl, she continues to convice him to help her, because he basically has no choice. By the sounds of it, the end of the world is inevitably soon, coming with a sign of rose lightning. That is his deadline, and apparently the world’s as well.

Before we close the book, we check back in with Shreds and the unconscious Crowlita. He’s trying to rush her to a hospital, but is finding no support given his past misdoings. We also get a look into Crowlita’s mind, and see a horrifying image of a werewolf looking thing erupt from the chest cavity of a naked woman. The werewolf runs around for a bit, until we see it get attacked by the evil sperm monsters that we’ve seen in earlier issues. It’s also right about this time that Shreds is carrying her under his arm, and into the ER.

Sundowners #4 is much of the same for this series. Aside from the epic battle between Brandon, Citizen and Arcanika, everything else moved a bit slower, and focused on the characters and their backgrounds. I understand this to be imperative to a long standing story, but it doesn’t negate that these character focused issues always tend to be a little less exciting to read. The art of the series continues to be as twisted as the story’s concept, and is one of the driving forces in my continuation of consuming this series. Sundowners #5 is out Christmas Eve, and maybe will have the whole group together again? We’ll just have to wait and see.