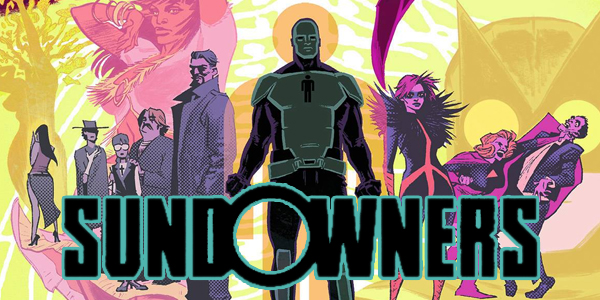 Sundowners is back with new wounds, new masks, a new member, and the same pack of whack jobs that you can’t help but root for.

Back on Christmas Eve, Dark Horse released the fifth installment to the Sundowners series. The story is written by Tim Seeley, drawn by Jim Terry and colored by Sean Dove. This issue finally sees the support group coming back together as they mend wounds and figure out how to spring their friend, The Patient Wolf, from the Illuminatrix’s church.

The Skinny
The Illuminatrix seems to be finally ready for an assault, despite being unable to turn Karl, The Patient Wolf. Karl struggles to connect with one of his captors in hopes to save her soul, but it may be too late. Meanwhile, the support group find each other at the hospital and manage to escape together after an altercation with some guards. This allows them to gear back up, and prepare their assault on the church.

The Good
These people seriously might be crazy, and now they’re pulling their doctor down with them. It’s been my stance with this book to keep a sane perspective, or at least a reasonable one. Due to the potential for delusions of superheroism, I’m forced to question if they really are fighting a threat or just causing a big scene in a hospital. The alien creatures we see are pretty terrifying, but do they really exist? I liked Dr. Shred’s take on this. He states what he thinks is real and what’s their perception, but by the end of the story, he too might be losing his grip. Plus we still don’t really know what happened in his past, but that pesky reporter does, and he’s making sure to be there when the doctor messes up again.

The Not-So Good
Most of the art in this series has been fantastic, but it always irks me when the text doesn’t match what’s happening in the scene. I noticed at one point, the story was talking about how Karl was the only one who kept his eyes open through the incantation. However, the panel it talks about shows everybody reacting, with their eyes open. If it wasn’t exactly opposite to what he was saying, or that integral to the story, I probably would have overlooked it. Now, if this is evidence that Karl is a habitual liar, and it’s part of his psychosis, then that’s a different story.

The Decision
So far, I enjoy reading the Sundowners series. This issue leaves us at a pretty exciting moment, and sets up the conclusion the first arc, which looks to be the attack on the church. The art continues to be very strong, and like the story, features dark undertones that gives me an uneasy feeling. Something big is going to go down when Sundowners #6 comes out on January 28th, but is it the battle they’re gearing up for, or will it be a pack of whackos assaulting a church?