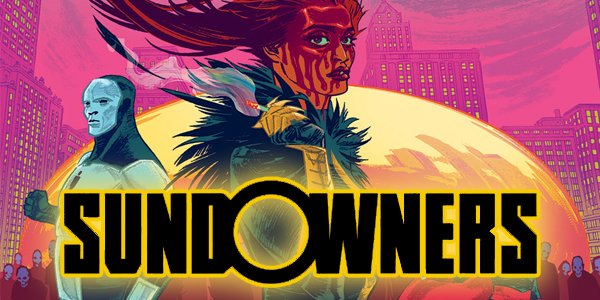 The team closes in on their final battle with the Illuminatrix, or they’re all a bunch of crazy jerks. Who knows?

Dark Horse Comics released Sundowners #6 back at the end of January. The story is written by Tim Seeley, drawn by Jim Terry and colored by Sean Dove. The support group have tracked down where their companion is being held, and initiate the rescue mission.

The Skinny
In this exciting end to the first story arc, The Sundowners Support Group finally make it to the Illuminatrix’s church where their pal Karl, The Patient Wolf is being held. With the help of their psychiatrist, the team is able to infiltrate and begin their rescue mission. However, by the end of the issue, we’re forced to ask, who exactly are they fighting?

The Good
Sundowners #6 continues its very interesting look at the mental state of these superheroes. I really like how the past couple issues felt like the support group may not be crazy, but in this issue we get one panel of Cherry witnessing full blown nuts. Or maybe it’s truly that they are the only ones who can see their enemy. Like a very interesting metaphor for someone dealing with the hidden demons of depression. Either way, the art helps to sell the story so well, mixing dark entities with lighter effect and background colors to make for a creepy contrast.

The Not So Good
I may be dwelling too long on one scene, but for whatever reason the cigarette scene stuck out to me in a negative way. Knowing what we know about these people, the idea that he thinks he was being controlled by an alien brain worm is plausible, but fighting it with a cigarette and a holy lighter felt underwhelming. Maybe it’s more metaphors for the burdens of addiction?

The Decision
I still really like where this story is heading. Between what we learn about Dr Shreds, and his history to watching Crowlita inadvertently commit murder, I am very excited to see where this creative team heads next. Not sure yet when it’s due out, but I’ll be there for when Sundowners #7 drops.