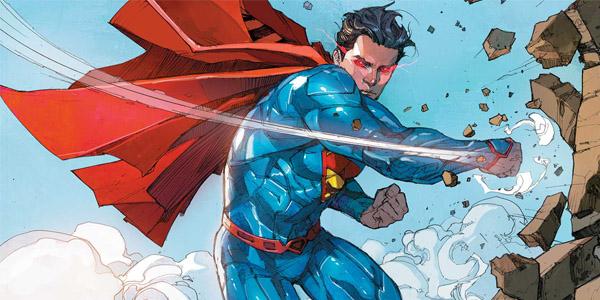 In the newest Superman graphic novel from DC Comics the Last Son of Krypton has to battle a rogue Kryptonian from destroying the Earth.The book is written by Scott Lobdell, with art by Kenneth Rocafort, and contains the arc from issues 13-17 and issue 0. The story starts out with a flash back to Krypton, giving the readers a look at the world that was destroyed. It jumps to present day where Superman, in an underground testing site, is trying to learn just how far he can push his body. Loosing track of time with all the testing, he rushes back to Metropolis before Clark’s life is ruined. There is some interaction the the Planet staff and Lois, but the real action of the story comes when Kara comes to town with another Kryptonian being. She is first drawn by the giant alien dragon, and then introduced to H’el.

H’el’s plan is to use the power of the earth and the Fortress to go back in time to save Krypton. Of course Clark can’t allow that and along with Supergirl, Superboy, the Justice League, and Lex Luthor they take down H’el.

Rocafort’s art brings the world of Superman alive with simplicity, though the panel placement can be difficult to follow at times. The old style of boxed panels can’t be found, instead sweeping panels that flow over multiple pages fill the book. There are quiet a few time jumps also without explanation, which at times can be jarring. The Superman and Superboy interactions were the best of the book, showing how much Superman does not really want to be a role model to the young hero. Plot points from the world before the New 52 were also a major part of the book, which may play out in the graphic novel.

Overall it was an ok read, filling in some holes in Krypton’s past. It was an ok story arc, but it felt like something was missing. This younger Superman/Clark seems much less sure of himself and his place in the world, which makes him more a Superboy than a Superman.