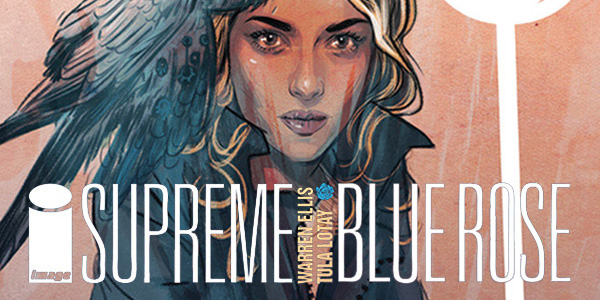 Image Comics double dipped in the Warren Ellis inkwell this week, publishing his newest title, Supreme Blue Rose #1. For the art, he teamed up with Tula Lotay to build a perplexing landscape for his peculiar parable.

We start off by witnessing a conversation between a man in a wheelchair and a tepid blond woman, named Diana. They are discussing great change, but become distracted by a faceless man named Enigma who is walking along the beach. The woman manages to talk to Enigma and her chairbound friend at the same time, despite them being quite a distance a apart. We see a woman, who’s crying, scaling a set of stairs that erupts from the ocean. Then the exchange ends with the realization that Diana can’t trust someone named Darius Dax. Confused as all hell? That makes two of us. It doesn’t help that Lotay adds in a bunch of extra lines to her illustrations, which adds disorienting movement to the panels. There’s also the sense that they’ve intentionally done some double printing to mess with the viewer’s perspective.

By the time you land on page six, you realize it was just a dream sequence. This makes some of the jumping around a little more understandable, but the illustrative style doesn’t change. We see Diana wake up in her bed, then look out the window at the city, and the pages feel as energetic as the dream sequence. It appears they purposely left Lotay’s blue pencil sketches in to visually confuse and distract the readers. Diana blames sleep deprivation and a lack of meds for the bizarre dream, then takes a cab to the National Praxinoscope Company (NPC from here on out because I’m lazy). On her way there, she catches a quick glimpse of the faceless man standing on a street corner, and applauds herself on a fine Instagram shot. Amusing because a Praxinoscope is an early animated projector, that worked by displaying a string of sequential photographs, giving the viewer the illusion of motion.

Once at NPC, the secretary walks Diana through the waiting room and into an office. Guess whose office it is… wrong! It’s Darius Dax’s! Ok, you probably guessed right. Anyway, once in his office we learn more about both of them. Seems that Diana is unemployed, and that Darius has assisted some of her friends with acquiring funds. Darius asked her to come down because he is interested in having Diana work for him as an investigative reporter (which happens to be her field). Darius’ business is set up on Strategic Foresight, supplying his customers with important information before it becomes common knowledge. Ellis uses the metaphor of a blue rose to better describe the business. Similar to how a blue rose doesn’t appear in nature, Darius is in the business of selling rare truths and being the most famous secret man you’ll ever meet. Regardless, Darius tasks Diana with finding Ethan Crane, and has paid her very handsomely to do so.

The story jumps to a quick poetic interlude featuring Professor Night, which strikes me as similar to Alan Moore’s use of Tales of the Black Freighter. Maybe we are getting a first look at Ethan Crane? Either way, after the two page aside, we pick up with Diana sitting at a cafe. She is joined by a man named Reuben, from Mr. Dax’s office. Reuben has a birth defect that makes his face to appear as a shadowy smear, and Diana is one of very few people that can see it. Reuben introduces himself as Diana’s backup/bodyguard, and hopes they don’t have to meet again, but if they do, she is to remain calm. He disappears back into the shadows and Diana looks for some encouragement from a friend. The issue ends with a conversation between Diana and her friend Noor. Noor enlightens Diana’s mind to what a great possibility working for NPC would be. I mean, what ambitious 27 year-old wouldn’t want to travel the world on someone else’s dime?

Visually, Supreme Blue Rose #1 feels like an acid trip. Lotay chooses bright colors with a watercolor feel to paint Diana’s world. The style that results is very unique, and makes you consider finding a pair of 3D glasses. The scenes Ellis writes at the beginning leave the reader scratching their head, yet oddly enticed. Similar to Ellis’ other current publication, Trees, it seems like Supreme Blue Rose will require some cryptic construction before the action unfolds. If you like Ellis’ style and you like books that make you ponder, there’s a good chance you’ll like Supreme Blue Rose #1.