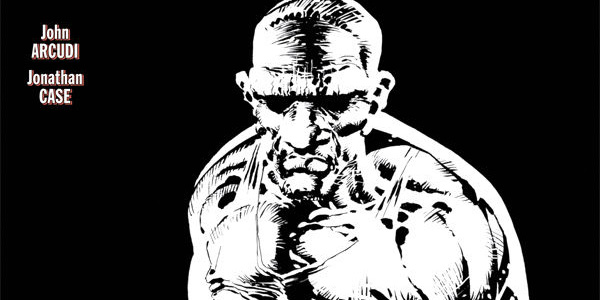 With the likes of Batman, Batgirl, Daredevil, Gambit and Spider-Man all vying for your comics budget this week, you might have skipped over that one with the awesome black-and-white cover drawn by Frank Miller. If that was the case, you might want to plan a another trip to the comic shop soon, as The Creep #0 begins what’s sure to be an unmissable new series from Dark Horse. 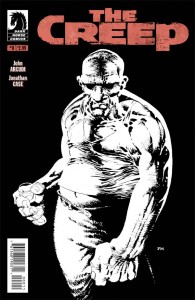 The Creep was originally printed in Dark Horse Presents, but this issue collects everything that exists of the story so far. The first thing we see is a teenager preparing to commit suicide, which cleverly transitions to the reveal of the book’s main character, Oxel Karnhus. He is a Manhattan businessman-turned-private-detective with Acromegaly, a condition that causes the face to grow abnormally large. Like all the great private detectives in fiction, he’s single, down on his luck and somewhat morose. But unlike the Philip Marlowes and Sam Spades, he doesn’t have good looks on his side. This throws a welcome twist into a well-worn genre and makes Oxel an even more sympathetic and relatable character.

Writer John Arcudi does a fantastic job of introducing us to his world and telling us only what we need to know. Oxel gets a letter from an old college girlfriend, Stephanie, asking for his services in the investigation of her son’s suicide. He travels to her hometown and speaks with her friend, whose son also committed suicide not long before. Through this conversation, we learn that Stephanie does not know about Oxel’s condition, as it started to afflict him after college. When they finally do meet in a future issue, it will no doubt be an emotional scene.

The dialogue is my favorite part of the book. Oxel absolutely sounds like a guy who has gotten tired of having to explain his condition to everyone and has become short-tempered as a result. The letter that he receives from his old sweetheart isn’t full of sappy cliches; it’s a desperate cry for help from a mother who lost her son and wants to know why. And of course, Oxel’s inner monologues are tinged with cynical observations that could have been pulled straight from the pages of a Raymond Chandler novel.

The art by Jonathan Case also exceeds all expectations. It changes style several times throughout the book, almost to the point that I thought different artists collaborated on the book. The main story is represented with smooth, clean lines and flat colors. The flashbacks take on a more classic look and more vibrant colors. The symbolism in these changing color palettes is not lost on the reader, and they add to the cinematic quality of the whole book. This is some of my favorite comics art that I’ve seen yet.

When the book is over, it’s answered a few questions but raised a whole lot more. The serialised nature of comic books is perfect for the detective genre, as suspense and mystery are some of its most important aspects. I’ll definitely be looking out for the next issue of The Creep, and I suggest any fan of detective fiction, comics or otherwise, to give this issue a read. 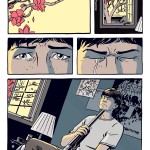 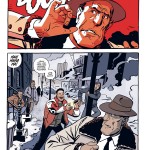 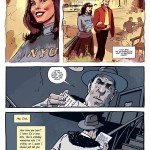 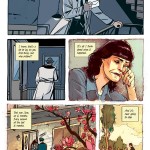