The spotlight shines brightly on Dark Horse this week for delivering some of the strongest comics on the shelves.  A murder-mystery involving a down-to-earth alien and the beginning of an epic new Star Wars tale really stand out from the crowd; keep reading to find out why. 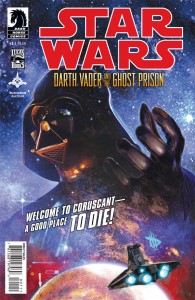 I haven’t been following many of the Star Wars comics published by Dark Horse lately, but when I saw that Haden Blackman was in charge of penning the script for this brand new miniseries I decided to take a look.  Blackman has also been co-writing the New 52 Batwoman, which started out stellar and slowly devolved into a convoluted mess.  I hoped that his storied relationship with Star Wars lore would lead him to deliver a great story, and so far I’m not disappointed.

Taking place during the era of the prequel trilogy (a few months after Revenge of the Sith), the comic tells a personal story of a recently graduated Imperial cadet named Laurita Tohm.  Tohm is incredibly intelligent, hard-working and dedicated, but socially awkward on account of having half a face and only one arm.  An accident caused this condition, but that’s all we know right now.  Soon after being given his first assignment, the Imperials are attacked on the planet Coruscant and he’s thrown right in the middle of the battle.  Darth Vader swoops in and saves the day, and the issue ends with a scintillating cliffhanger.

Instead of starting off by introducing a bunch of characters and interweaving storylines, Blackman decided to focus on a single compelling character on the side of the “bad guys”.  It’s obvious from this first issue that some big things are in store for Tohm and he already has the makings of a main character worth investing in.  His inner monologues, especially when he’s justifying uncharacteristically going against orders, are entertaining and believable, and a testament to Blackman’s skill.  Let’s just hope he avoids the pitfall that he fell into with Batwoman and keeps the story at least somewhat focused.

The art by Agustin Alessio really adds another level of realism to this book.  His style is one of simplicity in every regard, drawing only what needs to be drawn and focusing on perfectly complimenting the script.  I look forward to continuing this series and I would recommend it to hardcore and casual fans of Star Wars alike, as not much knowledge of the universe beyond the very basics is needed to enjoy it. 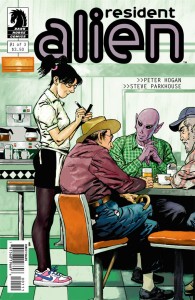 Right on the first page of Resident Alien, you’re warned that issue #0 must be read before issue #1 (which in itself is pretty off-putting to new readers, but I digress).  In all honesty though, if you can’t get your hands on that issue for whatever reason, you can still follow and enjoy Steve Parkhouse and Peter Hogan’s offbeat tale of an alien who crash-landed on Earth and began a quiet life posing as Dr. Vanderspeigle in the laidback town of Patience, USA.  In issue #0, his life of fake leisure was interrupted when the chief of police went to his home and asked for his help in investigating the recent murder of the town’s beloved Dr. Hodges.  Right off the bat, I was intrigued by the main character.  He has the ability to play Jedi mind-tricks and make people see him as a normal person, and his senses are beyond that of a human’s.  The only thing he can’t do is understand what makes humans tick, and the scenes involving him trying to decipher human emotions are easily the high points of the book.  He’s trapped on Earth and now he’s roped into helping a bunch of humans that he had been avoiding for years.  It’s an interesting mix of science fiction and mystery as he tries to help uncover the murder of this doctor while also focusing on his previous enigmatic life off-world.

The art by co-creator Steve Parkhouse perfectly suits the story.  It’s low-key and devoid of any sort of flash, and it’s just right for this really kind of subdued story; the way Parkhouse always draws the main character as a typical large-eyed alien, even when he’s being seen by the other characters in the book as something else, is great.  Fans of explosions and tons of action in their comics might not be into Hogan’s deliberate pacing.  It would be a shame to pass over this one though, as it’s a refreshing take on the science fiction genre that any fan of comics can appreciate.