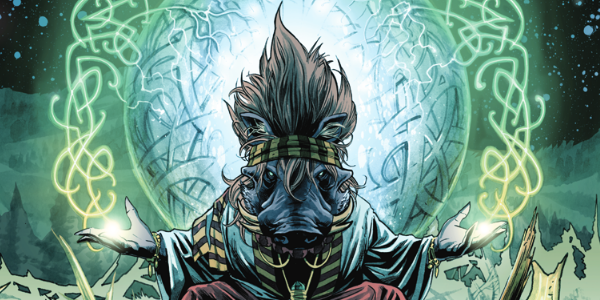 Tooth and Claw #1 proves that this series has much more to offer than just animal wizards.

Usually when someone uses the word “sprawling” to describe their story I feel automatically inclined to avoid it (I’ve been hurt before…). But I was pleasantly surprised to find that Kurt Busiek isn’t just throwing around a pretty word that inspires intrigue… 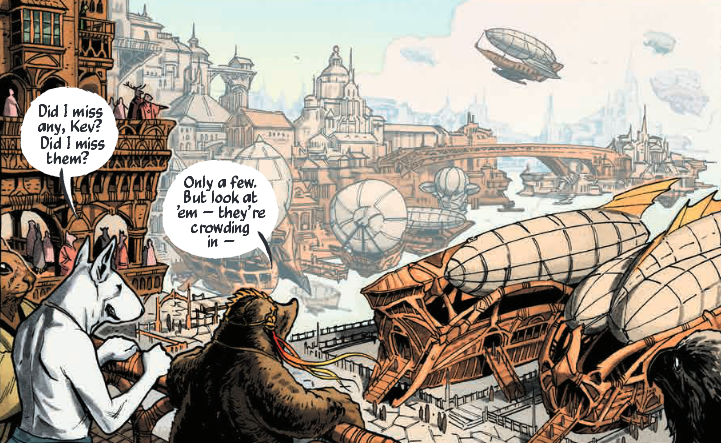 his world really is sprawling!

Set in the floating city of Keneil, the story is told from the perspective of Dunstan. Dunstan is a young dog-boy who’s father is the Trademaster of the city. He is content to accept his father’s position when the time comes, and to meanwhile live his life in service to the gods. But tragedy strikes, and Dunstan’s life, as well as every other person’s, changes in an instant. Normally this kind of story could be told in any setting, but Busiek makes sure that his characters, as well as his world, works first. It’s a truly unique settin 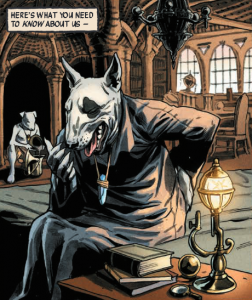 g bristling with intrigue, as the animals living in Keneil live very similar to pets, offering gifts and being humble in the shadow of their gods. Though the characters are pious, they still maintain a place of superiority over the wild beings on the surface. The dynamic between them has elements of both domestication and the importance of projecting strength in the wild. Their lives and perspectives are actually affected by their species, making the animal route actually mean something, rather than just being a device to push the fantasy setting. Dynamics like the one between the skydwellers and ground dwellers, reveal the amount of effort that went in to developing the story not just from a narrative perspective but a sociological and political one as well. This is done even more effectively by mimicing the problems that really do face modern society as well. Subjects like global warming, class warfare, religion, and terrorism are just some of the parallels that I was able to draw; and that was just the first volume!

Benjamin Dewey really creates a world worth remembering in Keneil, and a multitude of different characters with incredibly diverse styles. The twist of the whole thing is that unlike it’s contemporaries who use cartoon art styles to attach physical traits of humans, to convey human emotions to animal characters; Tooth and Claw uses a realistic style and embraces the physical nuances and aspects of it’s animals to convey emotions. Dogs are dogs, owls are owls, cats are cats, and you can still read the emotions on their faces. With the amazing detail that went in to capturing the true essence of each animal, while maintaining the individual personalities of the characters, you’d think that the art would dip at some point, but it never falters.  The scene 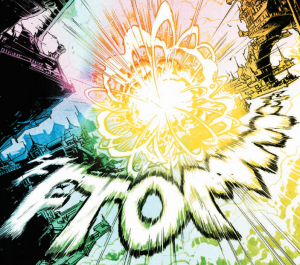 composition? Reflective of the events, with true impact. The set dressing? The characters and setting that saturate the background will have your eyes darting back and forth, trying to absorb all the details. Magic is represented in a glorious and almost cartoon style with incredibly vivid neon colors, which creates a direct contrast with the realistic colors and shades used throughout the rest of the volume. Jordie Bellaire makes the magic really matter on the page, ensuring it steals the spotlight whenever it comes in to play.

Tooth and Claw surprises with it’s level of depth and complexity to a formula that shouldn’t be able to succeed as much as it does. The story really showcases the talents of all of the writers and artists involved by creating a rich and vibrant world filled with interesting characters and bursting with color. It’s a delightfully unique approach to fantasy storytelling with an uncompromisable thirst for world building. From the miracle of the Kurt Busiek’s thoroughness in creating a society run by animals, to the Benjamin Dewey’s ability to perfectly capture the personality of a bull terrier, you’re sure to fall in love with Tooth and Claw. Come for the animal wizards and beautiful art, stay for the social and political commentary.