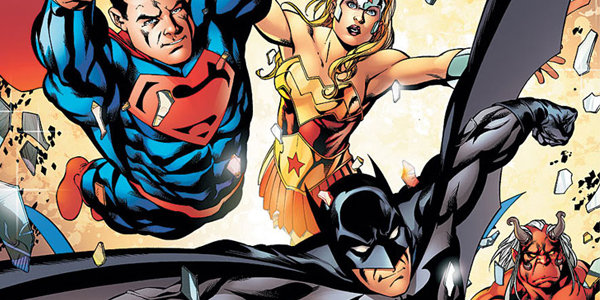 Been out of the comic loop for a while? Looking for something new to read? Jay Q is here to help you navigate the comic rack in a weekly look at TPB’s.

First question some of you may be asking yourselves is, “What is a TPB?” TPB or Trade Paper Back (also known as the Graphic Novel) is a compilation of issues from a comic book run featuring a certain story line from an artist or writing team.  These have become more and more popular over the years as comic book readers wait for the story to run its course in single issues and not wait monthly and read the story in one read. The downside of that method is the potential spoilers that may incur from other readers who do read the issues monthly.  I enjoy both medias and tend to buy the TPB of the stories that I enjoy and have them on my tables in the house for a quick read or a conversation piece.

With that said, let me talk about the TPB Teen Titans: Titans of Tomorrow.  This story takes place between Teen Titans issues 50-54 from 2007/2008.  The writers for this run were Sean McKeever, Geoff Johns, Marv Wolfman and Toff Dezago. The Artist from this run were Randy Green, Mike McKone, George Perez, Todd Nauck, Ale Garza, Jamal Igle, Eddy Barrows, Joe Prado, and Greg Tocchini. The story takes place after the Titans return home from an adventure in the 31st Century; the Teen Titans fell short of their destination home and arrived 10 years into their future. It was in this future they met their future selves now going by the names Batman, Superman, Wonder Woman, and The Flash. The Teens learn that will soon be facing catastrophes and hardships that will change their outlook on life and they will use ruthless methods to maintain world order. However, on their battle to get back to the proper time line Kid Flash and Superboy died in combat rendering that dystopian future impossible. Or is it…

The Justice League is seen being picked off one by one by people in familiar clothes. The current Teen Titans are then surprised by a much older looking Superboy (now going by the name Superman) and Kid Flash (now The Flash) with a plea to stand down and listen to the proposal by Batman (a future Tim Drake). When the Teen Titans get to the location they see the Justice League all captured, and the proposal becomes a threat that if the current Teen Titans do not follow the orders of the Future Titans then they will be forced to take them down and do what needs to be done to ensure that the future happens to their liking. With most time travel stories we know of the butterfly effect that it could have on each comic universe, and this book does nothing short of give you twist and turns every chance it gets.

As Starro invades the current Titans battle alongside their future counterpart in an attempt to make sure the battle happens as planned. The younger Titans see the opportunity to disobey their doppelgangers and save the day the only way the Teen Titans know how…with an extreme (but controlled) chaos. As the mega battle rages on we get new visitors from the future The Titan Army lead by Lex Luthor and we see them all fight Starro and the Starro spores.  Tim Drake realizes the only way to stop this madness is to change themselves and to do this he puts a gun to his head to make the ultimate sacrifice. This attempt is thwarted when Wonder Girl flies in and realizes that she loves Tim and kisses him. The Future Superman calls Tim a traitor and goes in a rage. Then with gunshot from the future Tim Drakes gun, Kon-El is seen pierced by a kryptonite bullet. This creates a ripple effect sending all the Titans from the future back to their time.  The day is won and the Earth is saved, but at what cost?

If you like time travel stories and what if scenarios this is the book for you!